“In those days, two factors operated in my favor: there was still quite a bit of old popular music… to be had at moderate prices; and the collector’s “bug” had bitten only about a dozen individuals in this particular field. Business took me to many parts of the country, so I managed to pursue my avocation in off-hours, when I was not selling straw hats to the men’s furnishing stores.”
– Lester S. Levy

Rather than keeping his collection under lock and key, Levy welcomed musicians, publishers, celebrities, and even department stores to explore and exhibit his thousands of songs. The objects below document both Levy’s collecting practices and the many ways in which he sought to educate the public on popular music history. He gave numerous lectures, wrote a series of books, hosted community performances, and sponsored exhibitions— all in the generous pursuit of sharing his passion and animating his collection in the public eye.

What is the most cherished object or collection you own? 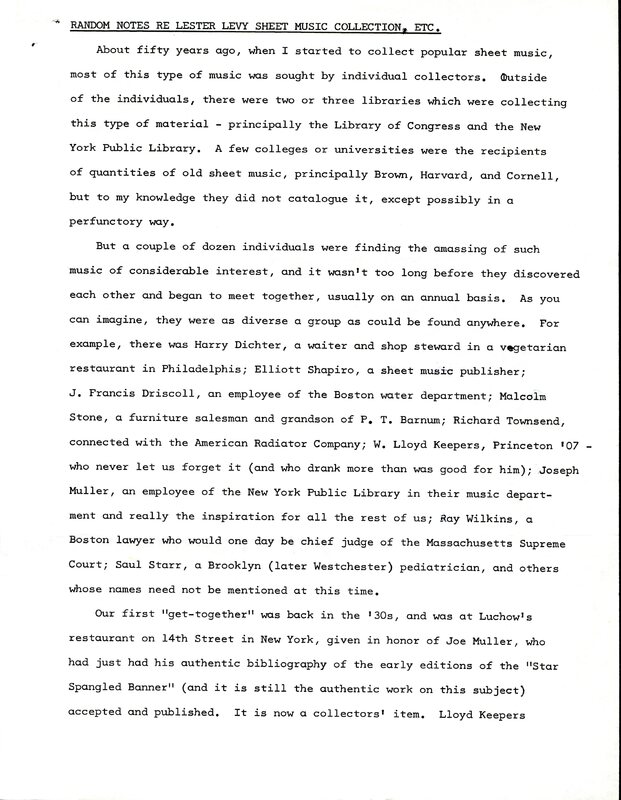 These notes written by Levy highlight a key aspect of his collecting career: his deep connection to the sheet music community. Levy’s circle included experts such as Harry Dichter, Elliott Shapiro, and Richard Wolfe—authors of the essential reference volumes for American sheet music history. 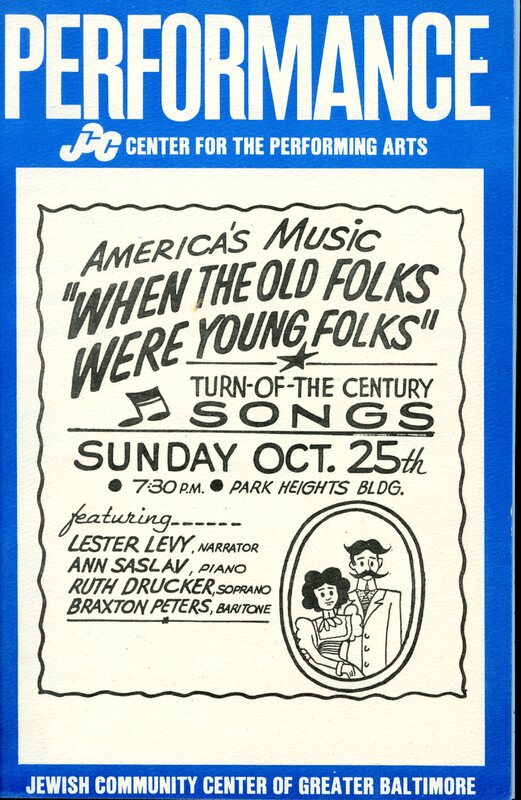 This advertisement promotes another performance featuring Lester Levy at the Jewish Community Center. 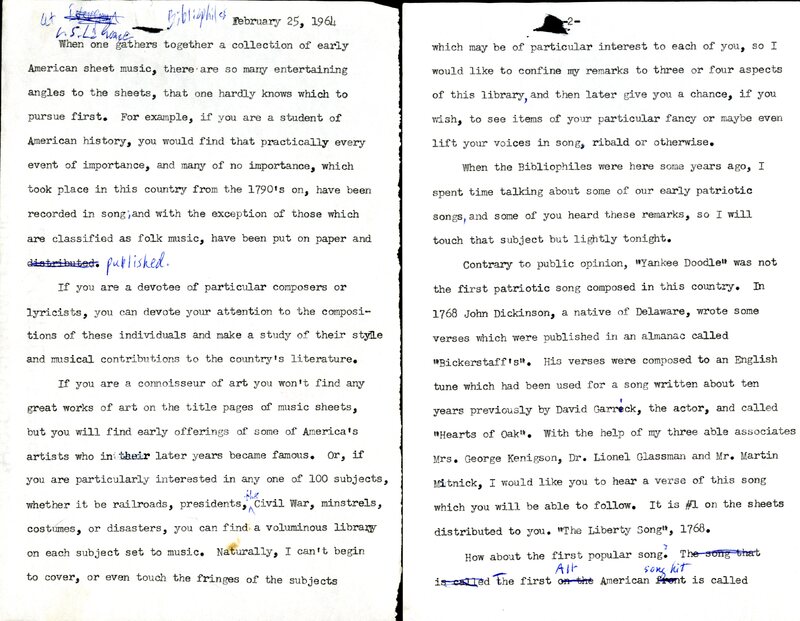 Levy used his collection to inform countless speeches, lectures, presentations, and exhibitions. This speech on patriotic music was given to local book enthusiasts, the Baltimore Bibliophiles. The accompanying advertisement promotes another performance featuring Lester Levy at the Jewish Community Center. 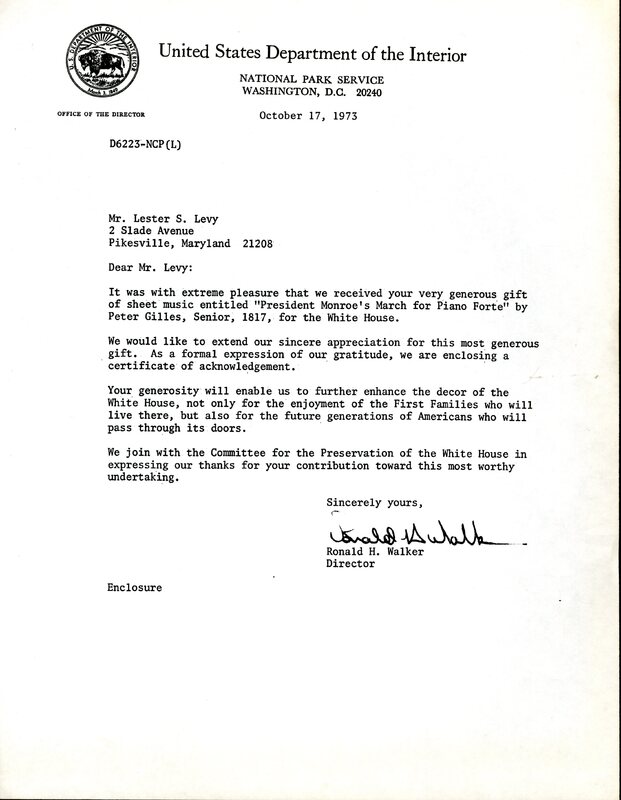 United States Department of the Interior to Lester Levy

While Levy held onto his most precious songs, he also found opportunities to donate them to local institutions. This letter from the Department of the Interior thanks Levy for donating the song President Monroe’s March for the Piano Forte to the White House collection. 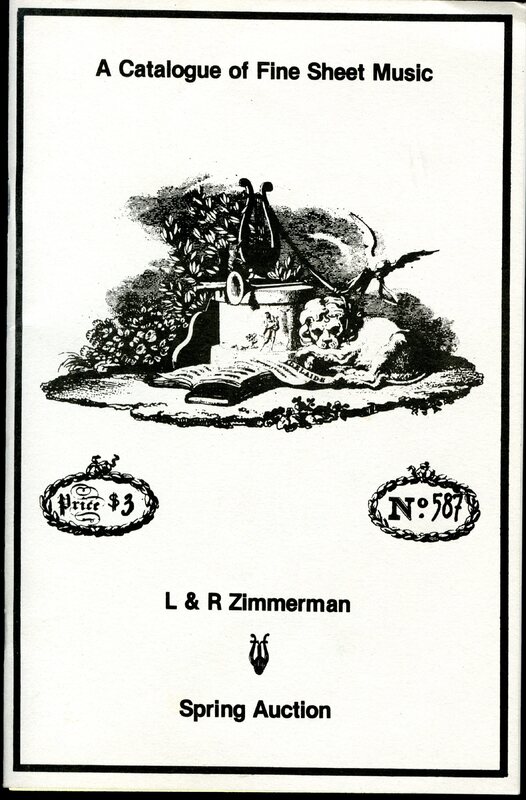 A Catalogue of Fine Sheet Music 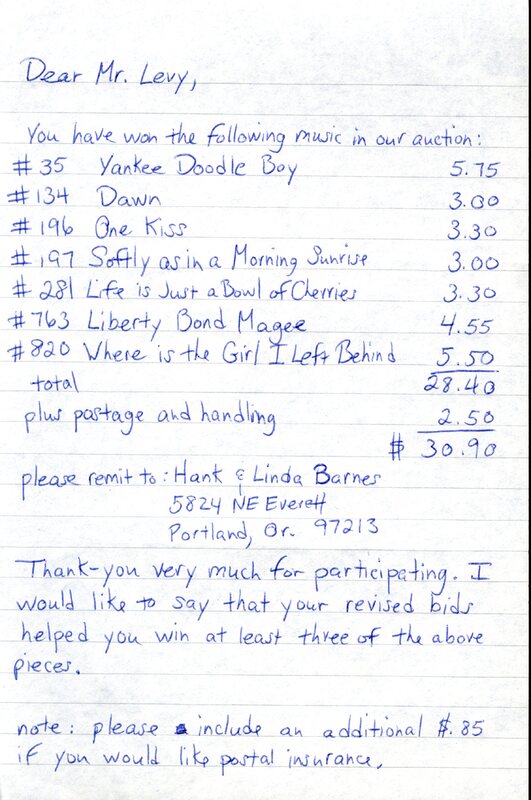 Levy obtained a large amount of his music by auction. He received dozens of catalogs like these, then mailed in his bids and waited to see which songs he had won. He also developed relationships with booksellers, like Bailey Bishop, who would proactively reach out if they found something he might find interesting. 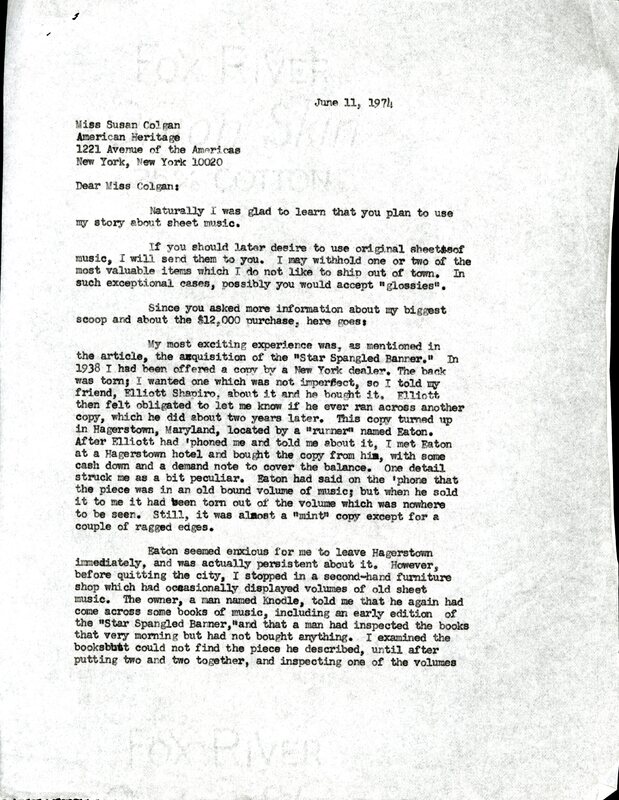 This letter documents two of Levy’s most astonishing stories from his collecting career: his obtaining a first edition of the Star Spangled Banner, and a single $12,000 purchase.

Lester Levy owned one of the largest collections of Star Spangled Banner material ever collected, now distributed between Johns Hopkins University and the Maryland Center for History and Culture. The collection includes many versions of the Anacreontic Song (the title of the original melody before it was adapted by Francis Scott Key) and later versions of the banner.

As he describes above, Levy was alerted to an opportunity to purchase a first edition of the banner from a mysterious dealer. Stopping at an antique store afterward obtaining it, he found that his purchase had been stolen out of a bound volume earlier that morning (the tear marks on the paper matched exactly).

Thankfully, the store owner allowed him to re-purchase the song, where it remains in our collection today. Levy eventually obtained another first edition of the banner, which he sold privately in 1946. 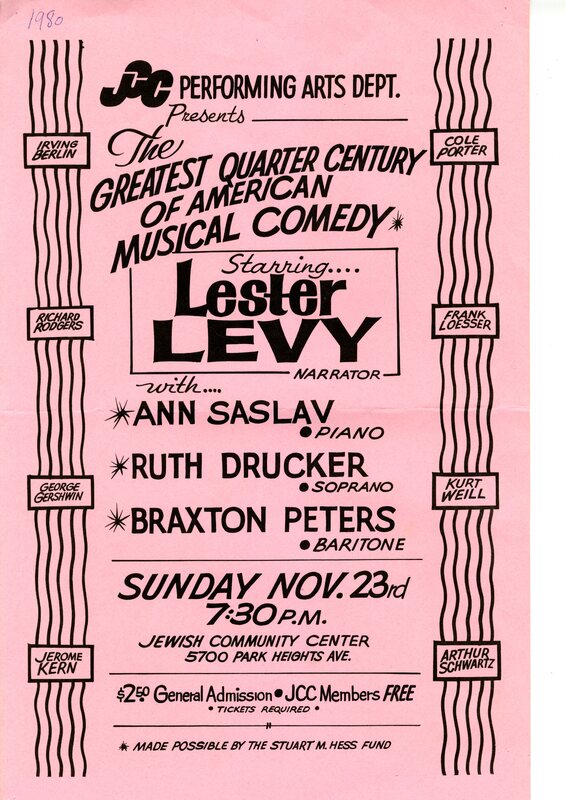 Levy was closely connected to the Jewish community of Baltimore, serving as President of The Associated and bringing many performances to the Jewish Community Center. This poster advertises a performance in which Lester Levy lent his expertise as narrator.