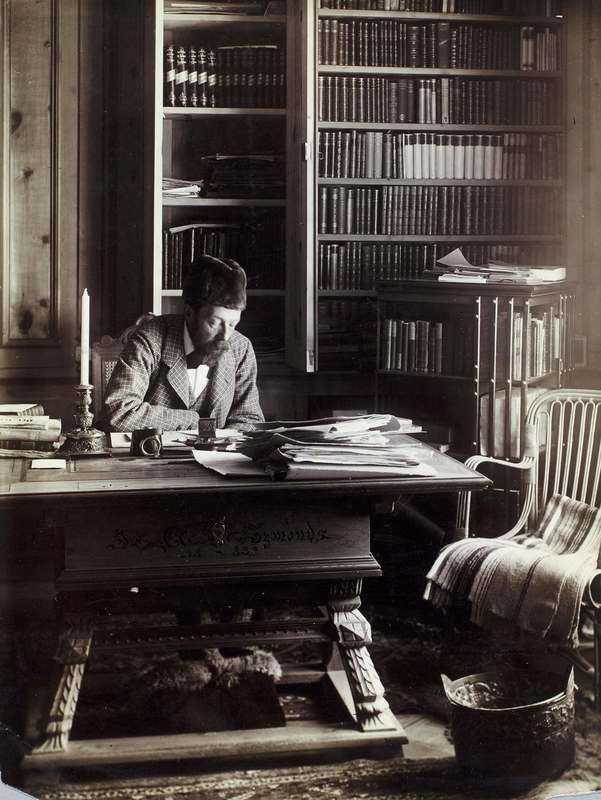 Symonds, born in Bristol, England in 1840, was the author of a pioneering study of Ancient Greek sexuality, of gay-themed poetry, and of books on Greek literature, Italian travel, and the Renaissance, among other topics. He was also a devoted reader and collector of books, photographs, and works of art. Especially after Symonds' move to Davos, Switzerland in 1880 to manage his tuberculosis, this personal library served as the hub of his literary and social networks, connecting him to the world of Classical scholarship, the emerging scientific literature of "sexology" and homosexuality, and like-minded contemporaries with whom he exchanged books and letters, such as Walt Whitman, Havelock Ellis, and Edward Carpenter.

After his death in 1893, Symonds' library was dispersed. Some of it was sold through the Bristol bookseller William George's Sons in 1909; additional volumes that had been bequeathed to Symonds' literary executor (and censor) Horatio Brown were sold at auction in 1927, after Brown's death. In this virtual library, we identify and describe books owned by Symonds as they were inventoried in these sale catalogues and individual copies associated with Symonds through his bookplate or signature, as recorded in library catalogues. Eventually, we will also include books mentioned or referenced by Symonds in his memoirs and letters.

Use the tabs above to navigate. Or visit our main site.