The Fashion of Suffrage

When women throughout the country took great strides towards equality, they used fashion as their weapon to further their cause. At the same time, anti-suffragettes took this change as an opportunity and depicted women suffragettes and their fashion in a certain negative way in newspapers, postcards, and other media. While suffragettes portrayed themselves as strong and independent women, abandoning restrictive clothing for more comfortable attire, antagonists of the cause interpreted this boldness as being masculine and too outspoken.

Suffragettes expressed themselves by breaking away from traditional expectations and this was reflected in their fashion choices. Some women's rights activists were anti-fashion, and claimed that to be fashionable was to accept female oppression, especially when it came to the oppressive undergarments, such as corsets, that women were expected to wear. This drastic change in women’s fashion led to controversy and deepened the line between proponents and opponents of the women's suffrage movement. This selection of postcards highlights women’s fashion during the early years of the 20th century, and explores how clothing and attire were used by both sides of the conflict to promote their cause.

Inez Milholland was most famous as the leader of the huge 1913 suffrage parade in Washington D.C. In this postcard, she is wearing a coat with a white blouse and boots, and looks very smart and tailored. Her clothing is typical of suffragette fashion: practical and permitted ease of movement. As women's fashion began revealing more of women's bodies, and hemlines rose above the ankle for the first time, women opted for boots to cover their ankles. Also, women were often encouraged to wear white in suffrage parades, to suggest the purity and high-mindedness of their goals. 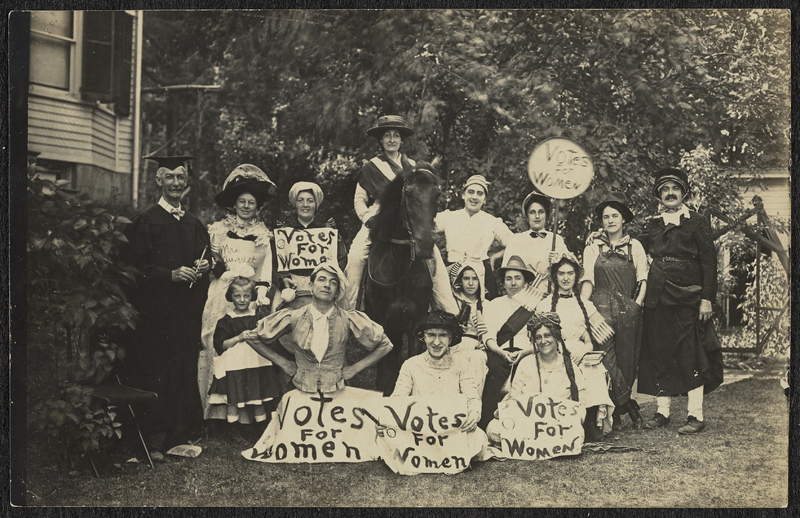 This photograph mocks women suffragette parades, with men dressed in suffrage drag. Most of the men and women are dressed in white, trying to imitate suffragettes. Some of the women are also in trousers, including a woman dressed in overalls, similar to the popular "Pantalette Suffragette" postcard. This picture depicts how suffrage antagonists saw suffragettes. 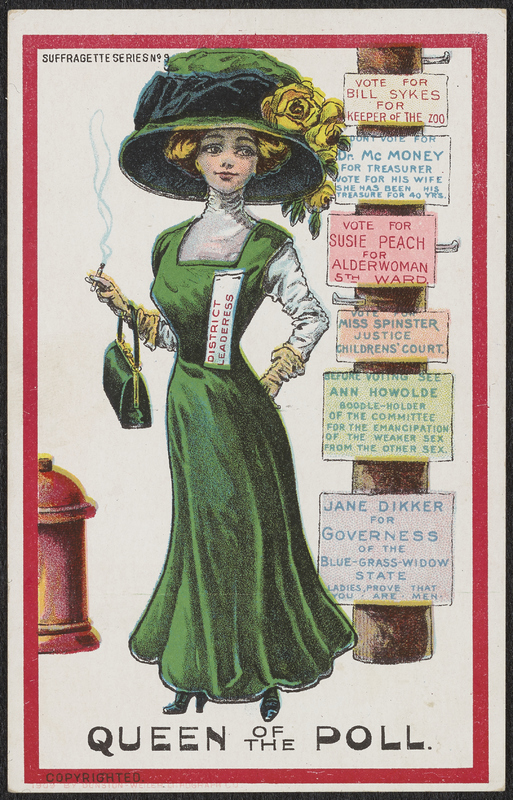 The Queen of the Polls

This postcard, along with several others in the popular Dunston-Weiler Lithograph Co. "Suffragette Series" complicates the conversation surrounding women, fashion, and voting rights.  "The Queen of the Polls" depicts the suffragette as beautiful and young, wearing her fashionable hat.  However, the suffragette's lit cigarette undermines the femininity on display. 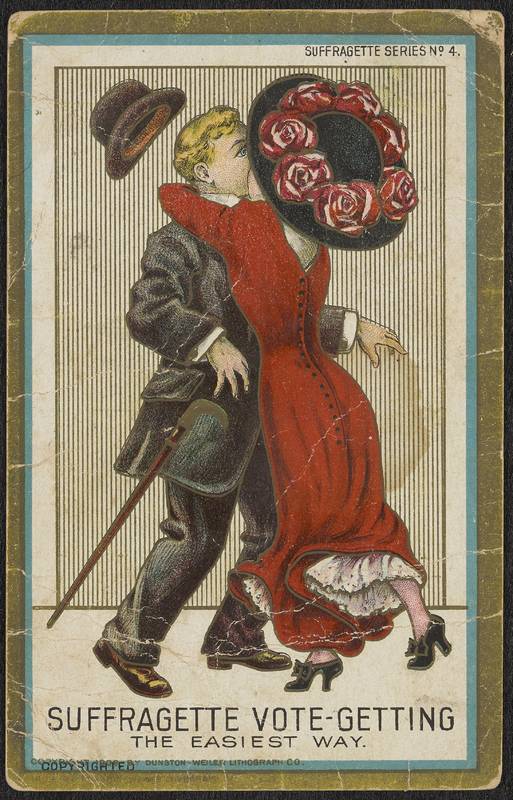 This postcard is another illustration of women's fashion, showing a suffragette wearing a large, flowery hat. Looking at this depiction of suffragettes, it’s hard to tell that they were involved in one of the most violent guerrilla campaigns ever mounted in this country. 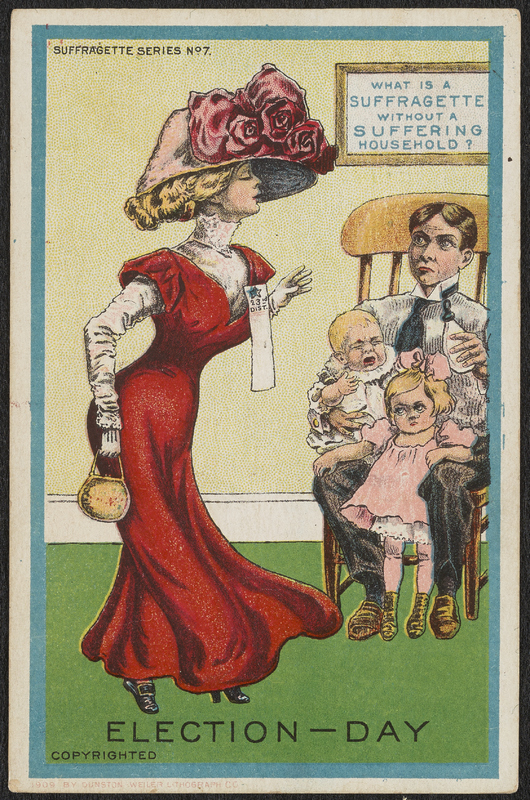 This postcard carries an anti-suffrage message “What is a suffragette without a suffering household?” Yet the mother is portrayed as beautiful, with a curvy silhouette, wide brimmed hat, flamboyant red dress, and high heeled boots. She is depicted not as an unattractive, unmarried woman, but an attractive lady. 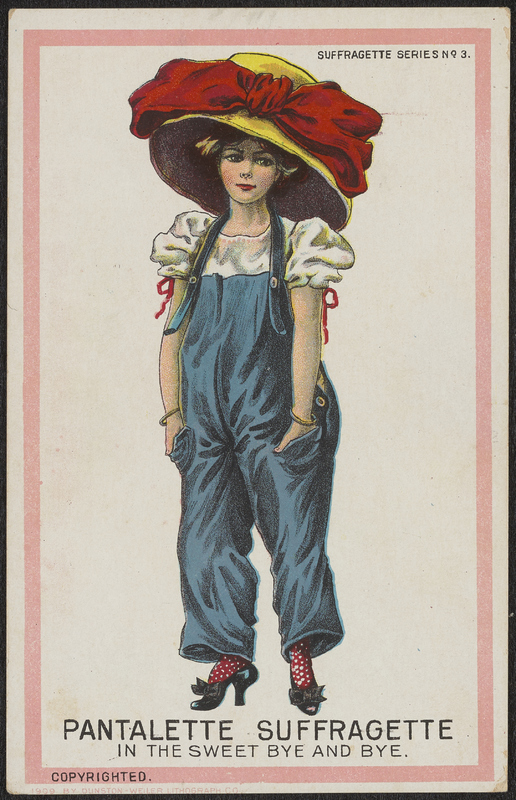 The wearing of pants by women greatly impacted how women were perceived. These two postcards clearly carry anti- suffrage meaning and illustrate that for anti- suffragettes, women who were fighting for voting rights were lacking femininity, and crossing the line of traditional norms and ethics. 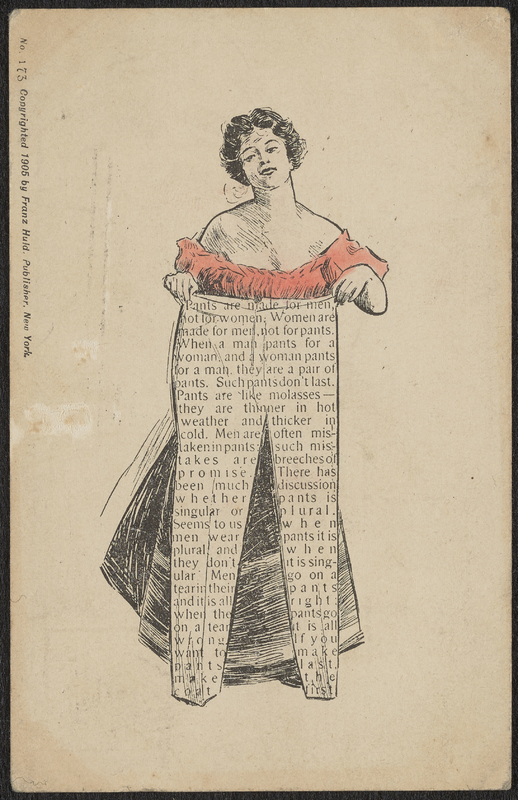 Pants Are Made for Men 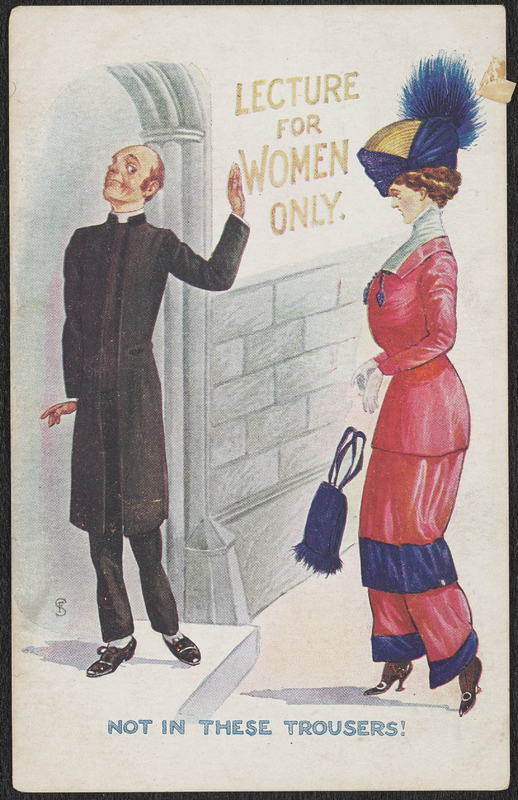 Not in These Trousers!

This is one of the most famous postcards about suffragettes wearing pants. It illustrates how the wearing of pants by women represented the rise of the modern free woman, while simultaneously depicting just how transgressive the fashion choice is. 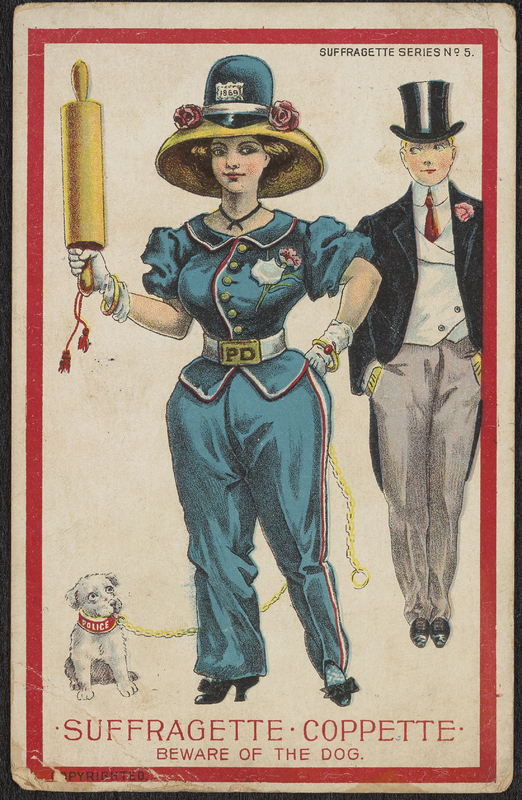 This extremely vivid, visual postcard contains so many elements that anti-suffragettes used to display the masculinity and ugliness of the situation during the suffrage movement. The postcard shows the alleged ridiculousness of allowing women to not just vote, but become employed as police officers as well. The Suffragette Coppette is holding a rolling pin and her police dog, tethered with a golden chain, is not very assertive. The accessories, "feminized" police uniform, and fashionable hat are all intended to make a mockery of women gaining their rights. 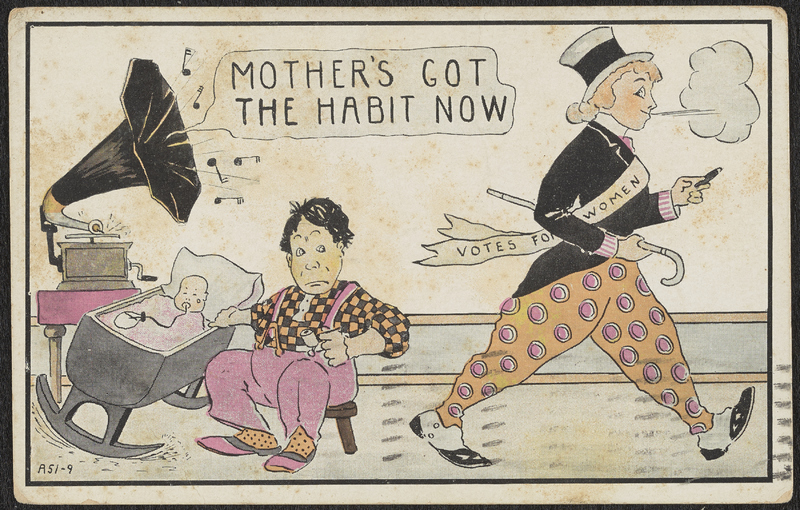 Mother's Got the Habit Now

Dress is a powerful form of communication. The postcard named “Mother’s Got the Habit Now” illustrates what could happen if suffragettes finally received the right to vote. The traditional family would transform into a monarchy where the mother would rule the home. The clothing suggest this change: colorful pants, a cigar, masculine hat, and boots with no heels.