Under the auspices of Hopkins Retrospective and through the Sheridan Libraries, this archive explores and publicly presents archival evidence related to the life of Johns Hopkins and his family.

In a message on December 9, 2020, Johns Hopkins University and Medicine leadership shared with the Hopkins community our archival discovery of two government census records that state Mr. Hopkins was the owner of enslaved people in 1840 and 1850, and perhaps earlier. By 1860, there are no enslaved persons listed in his home.

We are now taking a careful look at the widely accepted story of Johns Hopkins as an early and staunch abolitionist, one drawn largely from a book of remembrances written by his grand-niece, Helen Thom. We are beginning a journey of further research and discourse through this bibliographic archive. Our efforts strive to illuminate all aspects of our founder in order to arrive at a more complete and truthful narrative of his life.

There is a thin evidentiary record of archival materials relating to the life of Johns Hopkins. For years, leaders and community members have centered their story of our founder on his benevolent gift to the city of Baltimore: a university and a hospital, and the accepted narrative that he was an early abolitionist. There are documents—his will and letter to the hospital trustees—that set the stage for this philanthropic bequest, including his direction to his trustees that the hospital serve the indigent of Baltimore regardless of race, sex or age and the founding of an orphanage for the care and education of Black children in Baltimore. It has become clear that the institution has also relied upon the narrative posited by Thom that tells the story of Johns' Quaker parents manumitting their enslaved individuals in 1807, a narrative that has recently been scrutinized and cannot be substantiated.

Historians have discovered few documents written in his own hand, and no historian has written a comprehensive biography of him. It seems that Johns Hopkins’ personal papers were destroyed prior to his death and that perhaps surviving records were lost. The archival record we are piecing together indicates that Johns Hopkins was a complex person. A businessman and philanthropist whose bequest transformed higher education and healthcare in America, a slaveholder who operated in a world that relied heavily on the institution of slavery, and a man reported at his death to have held anti-slavery views. 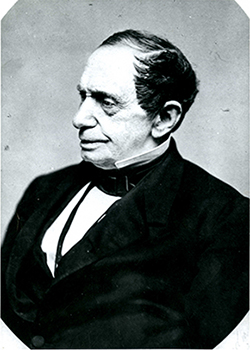 Portrait of Johns Hopkins
In 1867 Johns Hopkins, a wealthy financier, published his intention of founding a university and hospital, each to bear his name. He shared his wishes in incorporation papers, an instructional letter to the named trustees, and his will.i Importantly, a large portion of the $7 million gift he left was stock from the Baltimore & Ohio Railroad, a company he knew quite well. When Johns died in 1873, the Board of Trustees members he identified were tasked with carrying out his bequest, splitting the sum evenly between the institutions. Notably, Johns provided very little instruction for how the university should be structured, but he gave many specifics for the hospital and a ward or building that would be “erected for the reception and care of colored orphan children.” In the thoughtful and thorough letter he wrote to the hospital trustees, he instructed them to care for the indigent sick of Baltimore, “without regard to sex, age or color,” stating that “all races” should be received into the hospital.”ii Upon his death, he was revered in the local newspapers as a prudent, sagacious man, and many in Baltimore mourned his passing. 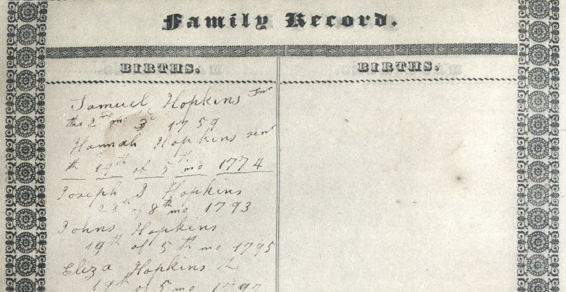 Johns, the second of eleven children, was born in 1795 to Samuel and Hannah (Janney) Hopkins, Quakers who owned a tobacco farm in Anne Arundel County, Maryland.iii When he was 17 years old, Johns left his parents' plantation, traveling to Baltimore to work for his uncle, Gerard T. Hopkins in the wholesale grocery business. Within a few years, he established himself as a savvy businessperson and ultimately entered a partnership with his brothers, Mahlon, Philip, and Gerard, forming “Hopkins & Brothers Wholesalers.”iv While living with his uncle and aunt, Johns also developed a deep affection for his cousin, Elizabeth, to whom he left his home when he died. Following in his parents’ footsteps, he maintained a bond with his Quaker faith and was a member at the Baltimore Monthly Meeting for the Western District. After being warned many times, Johns and his brother Mahlon were disowned from the Society of Friends in 1826 for “the practice of trading in distilled spiritous liquors.”v 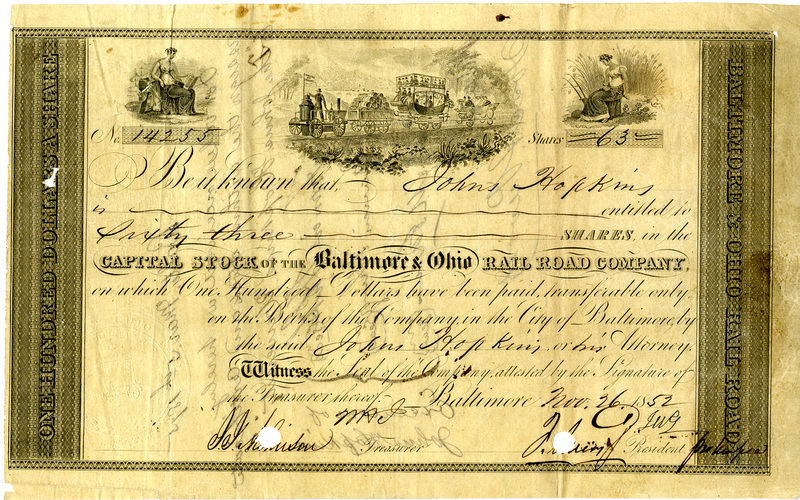 Johns led a successful life in Baltimore, but he was no stranger to illnesses like cholera and yellow fever that plagued cities during the nineteenth century; three of his brothers died at young ages. When Johns moved on from the grocery business, he pursued a career as a financier and investor. Johns served as President of the Merchants’ Bank, and he became chairman of the Finance Committee of the Baltimore & Ohio Railroad.vi One of the company’s largest shareholders, he assisted the B&O during financial crises and developed a friendship with the longstanding president, John Work Garrett.vii The men maintained this bond as they confronted the impacts of the Civil War on Baltimore, mobilizing the railroad to support President Lincoln and the Union. 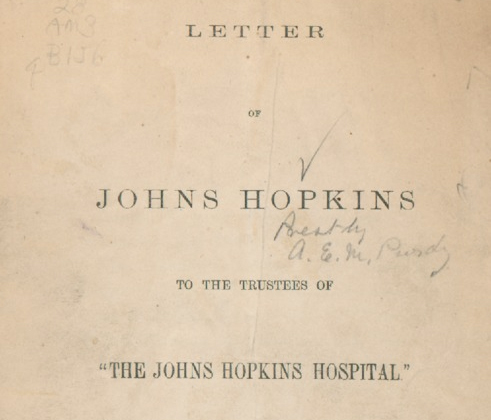 Johns Hopkins Letter to the Trustees of Johns Hopkins Hospital
As he aged, Johns turned his attention to his final contributions to the city of Baltimore. He made what was at the time, the single largest philanthropic bequest to an American educational institution, which, with the trustees’ help and the leadership of Daniel Coit Gilman led to the creation of America’s first research university. Johns Hopkins’ bequest also included explicit direction for his trustees to establish a hospital for the public, one that would treat the indigent sick of Baltimore.viii Going further as it related to supporting Black Baltimoreans, Johns made provisions in his will for the development of the Johns Hopkins Colored Orphan Asylum. This effort, Johns wrote would focus on the “maintenance and education of orphan colored children,” ones that were “in such circumstances as to require the aid of the Charity.”ix He also advocated for and provided funds for a training school for female nurses that would serve in the hospital wards. Lastly, Johns’ philanthropy also had a very personal tone; in his last moments, he took care in his will to provide for his family members and for the servants who lived and worked in his household: James, Chloe, and Charles.x On December 25, 1873, a writer in the Baltimore Sun reflected, “Baltimore loses not only its most prominent business man but a public benefactor.”xi

Johns Hopkins, his family, and slavery

The Hopkins family – beyond Johns, our founder – dealt in slaveholding and manumission in its earliest generations. Johns Hopkins, the elder (Johns’ grandfather) manumitted, or set free nine enslaved people in 1778 as recorded in Anne Arundel County land records.xii At the same time, Johns the elder issued delayed manumissions for 33 other enslaved young adults and children; this action transformed them into term slaves, meaning they would be free at the ages of 21 for girls and 25 for boys. His Quaker faith and relationship with the Society of Friends may have influenced this decision.xiii When Johns Hopkins the elder died, he bequeathed 14 enslaved people to his children through his last will and testament.xiv One of these enslaved individuals, a boy named John was given to Samuel Hopkins, Johns Hopkins the founder’s father.

Furthermore, in 1807, Samuel Hopkins signed an indenture contract with a free Black woman named Phillis, binding her sons, Jeremiah aged 10 and Thomas aged 7 to Hopkins until they reached the age of 21. These boys were to learn the “art of planting” from Samuel and when they became free, they would earn a “suit of clothes.”xv

Other archival documents from this earlier period in Johns Hopkins’ life provide additional clues about his relationship with the institution of slavery.  In 1831, as part of the Hopkins Brothers business endeavors, Johns and Mahlon sought the possession of an enslaved person from the Keech family in satisfaction of a debt.xviii In a later encounter, as detailed in a letter from the Hopkins Brothers to William B. Stone in 1838, they state that their firm would accept an enslaved person as collateral for a debt.xix By 1860, there were no enslaved people living in Johns’ household. In his 1870 census record, Johns’ household included his sister and James, Charles, and Chloe, three Black individuals who were listed as his waiters and domestic servant.

Hopkins Retrospective is working to interrogate and identify additional records that will tell a fuller story about Johns Hopkins and the enslaved people in his household and we seek to piece together archival fragments in order to develop a deeper understanding of the Hopkins family’s intergenerational relationship with slavery.

We are at the beginning of learning more about Johns Hopkins’ life as we develop a deeper, more extensive archival record. We hope that others – our students, faculty, and staff as well as our neighbors in Baltimore – will help contribute to this work of gathering and sharing documents and interpreting them. Please reach out if you know of relevant archival collections!

View FAQ on the Hub