Dear Billie:
I received word yesterday that you would like to know the opinion of the Peabody board members on the question of admitting a colored student to the Conservatory.
It seems to me that it would be a great mistake to change the present policy. In our climate the presence of negroes can to some be extremely offensive. Notwithstanding this, to others their presence together with whites at school, etc., is [illegible] in the South going to lead to such a mixed race as can see [sic] in Sicily or Brazil, — not a very edifying spectacle.
The effect upon our enrollment might be disastrous. At a time when it is probably going to fall for a while, due to less abundant money in parents’ hands, our principal competitors, — our own graduates teaching music —, may well take away a large part of our own enrollment. When the Board of St. John’s College decided not to accept a negro applicant, and the Executive Committee caused him to be accepted, a drive for funds which was contemplated had to be given up for want of Alumni support.
If the applicant for the Conservatory is really of outstanding talent, the Peabody should give him financial aid enabling him to study at the Conservatory in Boston, which is not vexed with the problem in question.
Sincerely yours,
Douglas Gordon

A Message of Inclusion, A History of Exclusion: Racial Injustice at the Peabody Institute, Acceptance of Paul Brent: 1949 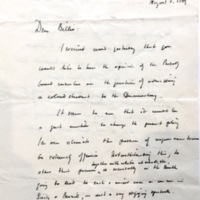 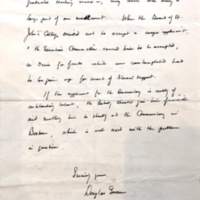