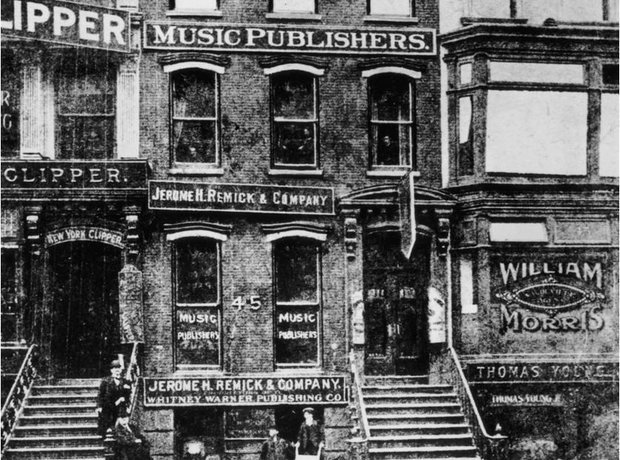 "It was the New York of 1883, the city of gas lamps and horse cars, of bustles and ballads." So begins the autobiography of Isidore Witmark, who with his brothers ran the powerhouse publishing company M. Witmark & Sons. At the end of the 19th century, the largest cluster of music publishers and venues was in Union Square, between 14th and 18th street. Blackface minstrelsy was still a dominant form of entertainment, but it was giving way to vaudeville. The foundation of home entertainment was the piano, as radio and television were not yet available. Theaters were segregated, with separate booking agencies for white and black performers. The city was transitioning from elevated railways to subways, and a bridge had just been built to Brooklyn. Over the next 60 years, Manhattan saw  both an explosion and migration of publishers and venues that cemented the industry in its current locations: Times Square and Harlem.

This interactive map explores both the entertainment boom and its migration through Manhattan from 1880 to 1940 using songs from the Lester Levy Sheet Music Collection.

The Rise and Fall of Tin Pan Alley

Halfway between Union Square and Times Square is a rather unassuming block-- 28th street, between Broadway and 6th Avenue. Where now there are electronic stores and bridal boutiques, the turn of the century saw at least a dozen sheet music publishers crammed into every brownstone on the block, in constantly shifting competition. A New Yorker walking down 28th street would have heard composers practicing new songs, young song pluggers on each corner competing to sell the latest hits, and tinny upright pianos through every open window. This cacophony of sounds reportedly led Monroe H. Rosenfeld to call this block, "Tin Pan Alley."

Nowadays, Tin Pan Alley refers not only to this section of 28th street, but the general explosion of publishing activity that migrated up Broadway, churning out millions of copies of sheet music each year. At the same time, the Harlem Renaissance was creating new venues North of Central Park and bringing performers like Eubie Blake and Ethel Waters to the stage. This era of unusual productivity eventually sizzled out as radio, phonographs, and cinema began to dominate entertainment. Meanwhile, Prohibition shut down venues and the Great Depression wiped out all but the most resolute publishers.

Consider the following as you navigate the map:

Map and exhibit created by Sam Bessen. Many thanks to  JHU Libraries Data Services team for their assistance with this project.

This project can also be viewed as a StoryMap.