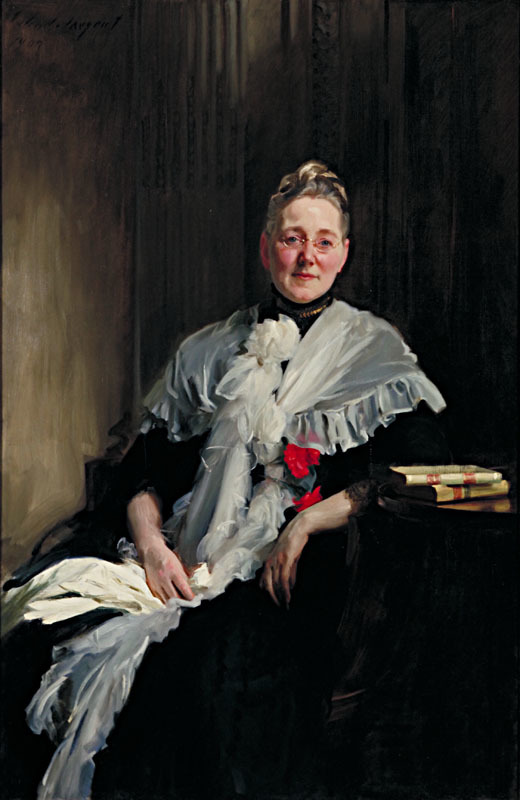 Garrett, the founding benefactor of the Johns Hopkins University School of Medicine, was born in Baltimore. Although tutored at home and educated in a private school for girls, she did not pursue a course of higher education. However, she had an acumen for business which was nurtured by her wealthy and politically powerful father, John Work Garrett, president of the Baltimore and Ohio Railroad. Valuing her business sense and sound judgement, he included her in his meetings with industrial leaders and major politicians. In 1884 when he died, he left her a large fortune as well as the freedom to manage it on her own. Going forward, she used her inheritance to support causes that were closely aligned with her dedication to advancing rights and opportunities for women. She extended funding as well as leadership in support of the Woman’s Industrial Exchange, the Bryn Mawr School, Bryn Mawr College, The Johns Hopkins University, and the women’s suffrage movement.

In 1889 when The Johns Hopkins Hospital opened, the long planned school of medicine was put on hold because of a major loss in the university’s endowment. While President Daniel Gilman sought a “man of large means” to endow the school of medicine, Garrett and a group of women friends seized the opportunity to launch a fund-raising campaign. They included M. Carey Thomas, Elizabeth King, and Mary Gwinn, whose fathers were members of the Board of Trustees of The Johns Hopkins Hospital, University, or both, which afforded them intimate knowledge of the Board’s affairs. They and another friend, Julia Rogers, established the Women’s Medical School Fund, and formed a network of committees in major cities throughout the country. Their ambition was to force the university, through public opinion and financial leverage, to admit women and men on an equal basis at the proposed school.

The women initially raised $111,300 which included a gift of $47,787.50 from Garrett. In the fall of 1890 the committee made a formal offer of $100,000 to university trustees which included the provision that the school of medicine would accept women on an equal basis with men. In the meantime, the trustees had increased the amount needed for the endowment to $500,000. The university set out to raise the additional funds, but the effort was unsuccessful. Garrett ultimately agreed to donate the balance of $306,977 provided that the university accept terms stipulated by the Women’s Medical School Fund.

On December 24, 1892, the university trustees voted to accept Garrett’s offer and conditions. The trustee fathers of Mary Gwinn and M. Carey Thomas were strong advocates for their cause. Although President Gilman and some faculty opposed some of the conditions that Garrett wished to impose, minor modifications were negotiated. In addition to the admission of women, the terms required that the school be a full graduate school leading to a medical degree, and that high academic standards be imposed for admission. Garrett’s coercive philanthropy enabled the school of medicine to open in the fall of 1893 and to welcome both female and male students. In his history of the medical school, Alan M. Chesney offered, “To this lady, more than any single person, save only Johns Hopkins himself, does the School of Medicine owe its being.”

Although Garrett’s friends had urged university trustees to commission John Singer Sargent to paint her portrait, they balked at his fee of $5,000 until she agreed to pay for half of the commission. She also commissioned the group portrait by John Singer Sargent of four original members of the medical faculty who were personal friends and eventual supporters of her campaign for admission of women – William Osler, William Welch, William Halsted, and Howard Kelly. That she did not select any of the notable faculty from the division of basic sciences to be represented in this masterful group portrait raised a bit of ire within the Hopkins medical community. Advocates for recognizing founding faculty of the basic sciences soon set up committees to raise funding for portraits of John Jacob Abel and Franklin Mall.