The Women’s Medical Fund Committee was officially launched at the home of Bessie King on 2nd May 1890. A published circular stated the purpose of the fundraising campaign: 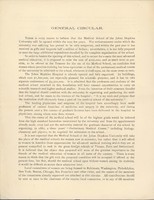 There is every reason to believe that the Medical School of the Johns Hopkins University will be opened within the next few years…. In order to hasten the opening of the school, and to secure for women the most advanced medical education, it is proposed to raise the sum of $100,000…All contributions will be regarded as conditional on a total contribution of $100,000, and on the acceptance of the condition by the Trustees.1

Committees were formed, officers named, and Mary Elizabeth Garrett promptly undertook to call on the many social contacts she maintained in Baltimore and across the country. Garrett recounted her progress to friends and allies in a series of letters that begin “Dear Girls.”

Mrs. Bayard Smith declines to serve not because she is not interested, but because she is not willing to be on a committee unless she can work very hard and she is very feeble to undertake new work. She began by saying she did not think she believed in women physicians, doubted whether they had nerve enough… The experiment of letting them study medicine had never been tried & c, When some of these impressions were corrected, she changed her tune … and wound up volunteering to distribute circulars if I w’d send them to her.2

Less than a week after Garrett wrote this letter, the first Baltimore committee meeting was held. Nancy Davis was chosen as chairman and Mary Elizabeth Garrett as secretary. But this was not just a local campaign. On 22 May 1890, Garrett visited Washington, D.C., and reported on her progress recruiting committee members not only there, but also in other cities. She wrote:

… I saw first Alice Riggs who is also in sympathy with it, and who like so many of the people we want most and who are most worth having, is tired and over worked. She and Janie her younger sister took enough interest in it to go over all the suggestions for Washington with me, give all the points they could about the people and the best means for reaching them, etc… Most of the names she thought excellent and one or two very good ones she added. …..Not being far from Georgetown, I went to see Mrs. Billings (John Shaw); found her, and she agreed to ask about eight of the Washington list to join the committee; she is very much interested and ready I think to be very helpful…I then went… to Mrs. MacLean’s… she also needed no conversion. … I asked her about Cincinnati and whether Mrs. Longworth and Mrs. Lars Anderson were as I thought the best people in Cinn to start the movement there if they would. Most emphatically she said they were…As you may remember by arrangement, Dr. Brown came and gave me a great many points about California to take to Mrs. Hearst. I think it will be best for me to try again this week to see Mrs. Hearst…3

Not everyone was “sympathetic” to the “scheme.” In the same letter of 22 May 1890, Garrett wrote:

I went to Mrs. Lincoln’s… she refuses to serve on a committee, saying simply that she is not in sympathy with women studying medicine; that she could not argue or give any reasons that it was a feeling of prejudice and she thought there was no chance of her changing her mind…Prejudice is certainly the most difficult thing to meet.4

Traveling north to Philadelphia to garner more political and financial support for the campaign, Garrett visited the home of Mr. George W. Childs, a prominent publisher and philanthropist. Her goal was to solicit a leading gift or donation for the Philadelphia Women’s Medical fund.

Mr. Childs rec’d me of course most cordially; of course he wd have preferred it to be a pure friendly visit and when I said I had come to tell him… about our scheme, …he exclaimed that he was interested & that he had told us he would be very happy to contribute $1000 toward. As nice as I could, I told him that we should very much like him to help it very early; told him of what had already been promised, of how much good it would do if he wd start the Phila Fund with a very early subs. (I indicated that the $10,000 basis w’d be a very delightful one) that it w’d influence not only in Phila but all over the country… He w’d of course have preferred not to be asked for… the ten thousand, but he was really as nice as possible … I am inclined to think that he will increase his subscription.5

Returning to Baltimore, Garrett made an appointment to meet with one of Baltimore’s leading clergymen. She wrote on 13 May 1890:

… I went with Mr. Latrobe this morning by appointment to see Cardinal Gibbons who has consulted all his theologians here, and yesterday in Washington, the people connected with the new Catholic University. He takes the broadest and most promising view of the subject. Sees all the objections as well as the merits of our programme and told me that I was entirely at liberty to say that he was fully in sympathy & would throw all the weight of his influence on our side. He added that he felt very sure that his position would lead possibly to a very vehement attack upon him from many quarters, as his favorable view would encounter both ignorance and prejudice, but that he was quite prepared to meet it. The other point he made was what he said he considered simply as a question of detail which of course he knew must have been considered by the people who were starting the movement, and those who were encouraging it, in connection with the University, and this was the possible desirability of separate dissecting rooms for men and women and the desirability of treating a few classes of disease separately. He felt equally as strongly that some classes of disease should not be treated by men as he did that some of the classes of diseases should not be treated by women, but all these things he thinks are questions of detail and can be arranged when the time comes for action. This seems to be a very important factor on our side as his sanction carries the opinion of all the leading Roman Catholics in the country.6

On 13 May 1890, (eleven days after the first official meeting), Garrett reported success not only in the response to their circular, but also to a planned “parlor meeting” [fundraiser] at her home:

Notes are pouring in about the parlor meeting. 75 acceptances have come in and about 60 regrets, the majority of the latter being because the Womens Club has a meeting at the same hour this afternoon unfortunately none of us here knew about. The majority of those regrets also expressed their cordial approval and interest… The hostility that you feared seems to me to be lacking as even those who are not prepared to give time to the matter give warm sympathy & even money. Subscriptions… amount at the moment to $21,950. Among those which were reported yesterday afternoon were one of $200 from Dr. Howard Kelly, & one of $100 from his Assistant Dr. Robb. These are significant.7

Indeed by 1st May 1891, just one year later, close to 700 individual subscribers had contributed towards the $100,000 goal set for the fund. Mary Garrett donated the most significant portion, $47,787.50. In her official capacity as secretary of the Women’s Medical School Fund, Garrett wrote to the Trustees on 27 April 1891, that the committee was able to give $109,000 on three conditions: that the balance necessary to open the school be raised by 1st February 1892; that the school open in October 1892; and that the school admit women on the same terms as men.8 The board of trustees accepted these terms on 30 April 1891, and on 1st May 1891, the University received a check for $111,300.