Johns Hopkins Hospital Base Hospital No. 18

As part of the US preparation for the war in 1916, the American Red Cross enrolled nurses for the US Army Nurse Corps Reserve and organized rosters of nursing units who could mobilize when called to serve. After the US declared war on April 6, 1917, these nurses served in hospital based units as members of the Army Nurse Corps. Bessie Baker (class of 1902) was the chief nurse of the Johns Hopkins Base Hospital Unit No. 18, which had 65 nurses, all but one from Johns Hopkins, to serve a 1,000 bed base hospital. The Hopkins Unit was the first medical unit sent to France, arriving with the first division of American troops in June 1917, and set up its hospital at Bazoilles-sur-Meuse in northeastern France. Initially they cared for those sickened by the cold damp weather, but by the spring and fall of 1918 were overwhelmed by war wounded, including a March 1918 convoy of 250 badly gassed soldiers. Small teams of doctors and nurses were sent to the American portion of the Western Front to evacuate wounded to evacuation, mobile and field hospitals. Two nurses died in service, Miriam Knowles (class of 1916) and Jeannette Bellman, a casual nurse temporarily attached to Base Hospital 18. The Unit returned to the United States and was discharged in February 1919.

Visit the Johns Hopkins Hospital and School of Medicine section of this exhibit to learn more about other medical staff at Johns Hopkins Base Hospital No. 18.

Bessie Baker at Johns Hopkins Base Hospital 18, circa 1917 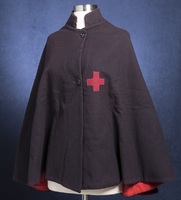