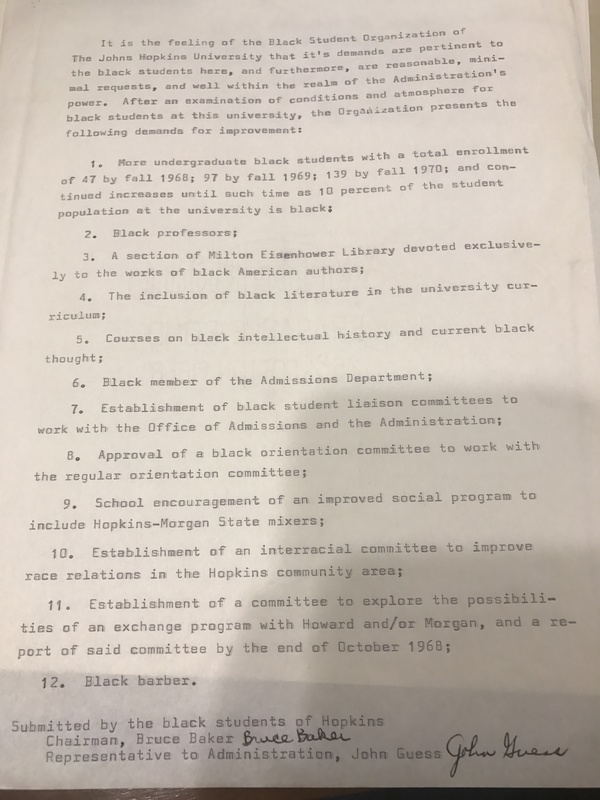 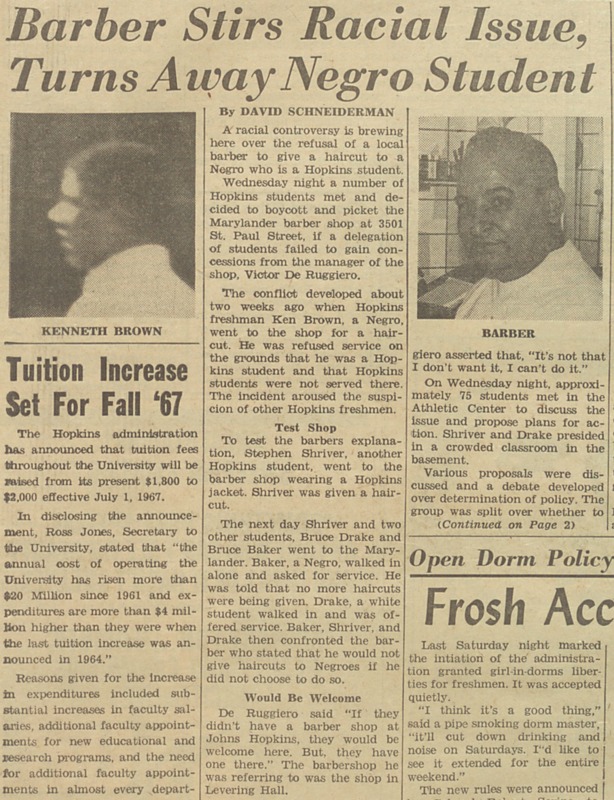 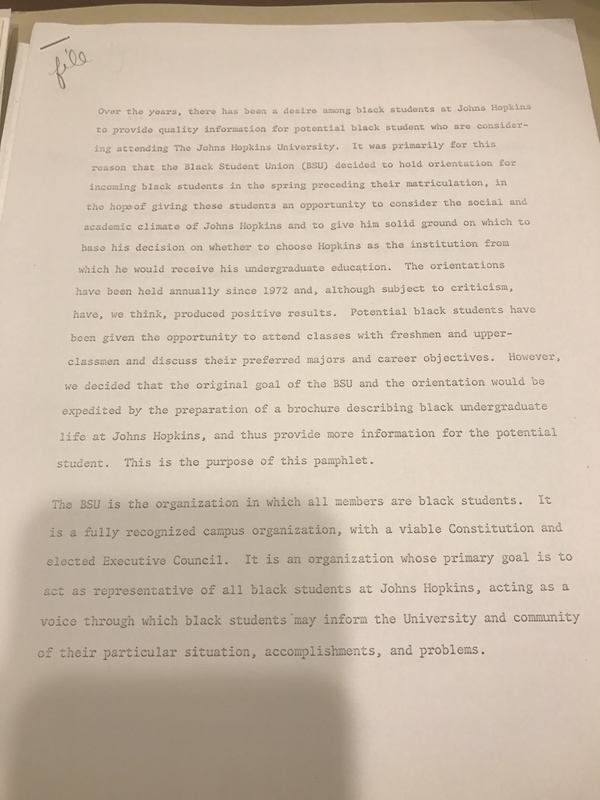 A JHU News-Letter editorial describing the attitude of university students and deans regarding attempts to recruit greater numbers of black students. 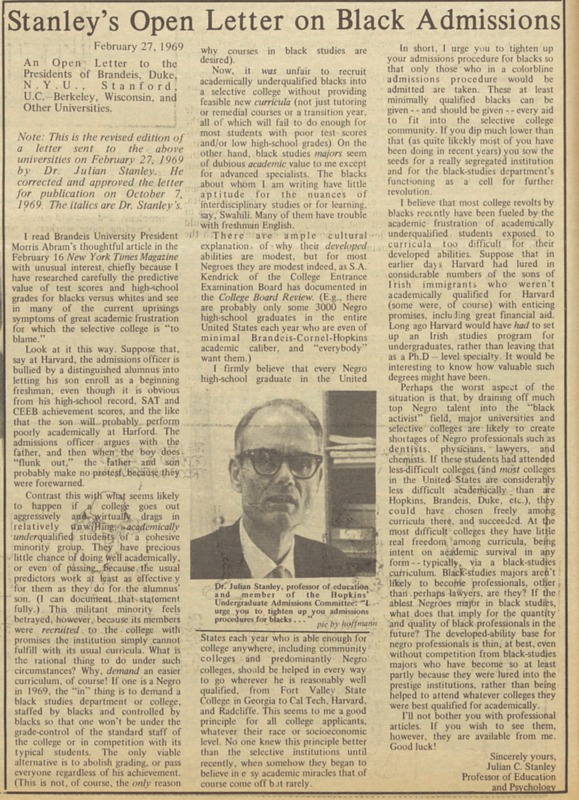 The editorial of Hopkins Professor Julian Stanley regarding the recruitment of African American students.

In 1961, an interracial coalition of Hopkins undergraduates founded the Committee for Basic Freedoms, with a mission of fighting racial inequality at JHU and in Baltimore. In November, the group submitted a report to the university regarding relations between the races, and accusing the administration of discrimination in admissions, housing and employment. The report affirmed that JHU was known as a predominantly white institution in a Southern city, and therefore had difficulty in encouraging applications from qualified black students, but it also urged the university to do more to recruit African American students.

Little was done by the university, however, in the years between this report and the passage of the 1964 Civil Rights Act, which specifically prohibited discrimination in higher education on the basis of race. The Civil Rights Act meant that JHU risked losing federal research funds if it did not make good faith efforts to end racial discrimination at the university. Seizing the initiative, the Committee for Basic Freedoms made a second report on race relations at Hopkins, urging the university to alter its discriminatory admissions, housing and employment policies.

In the new, charged atmosphere stirred by civil rights protests and facing the possibility of federal penalties, the university began making moves to integrate the university and eliminate discrimination. Urged by the activism of these students, new efforts were made at ending housing discrimination in Charles Village and eliminating housing discrimination in Hopkins-owned residences. The university also hired African American alumnus Victor Dates in order to help assess racial relations on campus and to recruit more African American undergraduate students to Hopkins.

In 1966, the Barber incident catalyzed student opposition to racial discrimination off-campus. In November of that year, a barber at the Marylander, a large apartment and office complex in Charles Village, refused to give a haircut to Ken Brown, a black freshman, and utilized several racial epithets in saying so. With the support of many students, the student council and the Hopkins administration, Brown and several negotiators lobbied the barber into agreeing to cut the hair of any JHU student. This incident also showed the differences between the relative tolerance displayed on campus and the continuing segregation in much of Baltimore city.

The late 60s marked a turning point away from the nonviolent and legalistic tactics of the early civil rights leaders and towards a more radical black nationalism. Riots broke out in black urban neighborhoods across the nation in reaction to a growing frustration over acts of police brutality, rising racial tensions, deteriorating economic conditions, and the assassination of the Reverend Martin Luther King Jr on April 4, 1968. On April 6, 1968, riots broke out in Baltimore that would last for six days, leaving six people dead and 700 injured. Douglas Miles, a black student at JHU during this period, described the anxious conditions on campus following the 1968 riot, although no African American Hopkins students were involved in the rioting.

“It was very, very tense, number one; the campus was locked down for several days. I was living off campus, I was in the midst of the riots, when the school reopened and we went back to regular routine, it was almost as if whites on campus were afraid to say anything to the African Americans on campus. I guess for fear that we would riot. I remember in one of my sociology classes, a white student raised a question to me, WHAT DO YOU PEOPLE WANT?”

The Black Student Organization, the precursor to the JHU Black Student Union, was founded by John Guess and his friend Bruce Baker. In May 1967, the two students approached the dean of admissions, Robert Bilgrave, with the notion of a “student-run African-American directed interest group…to act initially as a social group.” Bilgrave refused their request, believing that the institution of such an organization was a radical and menacing idea. Guess and Baker then requested a meeting with Lincoln Gordon, who also refused them. In response to this rebuff, the pair entered Homewood House and submitted a list of twelve demands to the administration.

The first demand was for an increase in the black undergraduate student population until the overall composition of the university was altered. The group hoped to see continued increases in the number of undergraduate black students until 10 percent of the student body was black. The following demands then called for the addition of new black staff members to administrative, faculty, and other positions at the university. The BSO called for an increase in the number of African Americans holding professorships at JHU, as well as for the inclusion of a black member of the Admissions Department. The BSO also called for changes in curriculum and in the university library collections to reflect the complexity of the African American experience. The students called for the creation of new courses on black intellectual history and current black thought and the inclusion of black literature in the university curriculum. They also called for the formation of a new section of the Milton S. Eisenhower Library devoted exclusively to the works of black American authors. The demands also asked that the university administration recognize the black student group as an official organization, to which the Hopkins administrators eventually agreed.

The Black Student Union then sought to have the Student Council approve its charter so that it could be allocated the normal funds for an active student group. The Council, however, rejected the charter because of its clause excluding white members from joining the organization. This clause had been included because black Homewood students had felt the importance of maintaining their identity and self-determination in a campus dominated by white students. This decision by the council surprised many students and faculty, and the BSU’s recognition became the subject of debate and discussion at Homewood. The JHU News-Letter and the Students for a Democratic Society stood in support of the BSU and its efforts, as was disclosed in an SDS letter to the student journal.

“The university administration and the power elite it represents have demonstrated that the academic education can and should be used to socialize exceptional black students into the managerial class of White America and weaken their Black identity. In rejecting the BSU charter the SC has been used to further these illegitimate aspirations on the ridiculous pretense that BSU membership policies are racist. We, the students, reject this action unequivocally!”

In its formative years, the Black Student Union, among other initiatives, aided the university in the recruitment of new black undergraduate students at Homewood. Under the arrangements of Brinkley, the Director of Admissions, BSU members would visit predominantly black high schools across the city and work to attract students from the black community in Baltimore. The BSU also worked to support social activism off campus, and held a high school lecture series at JHU which benefited mainly black inner-city high school students. Around the same time, the university founded its Center for Urban Affairs, and collaborations between the BSU and this research center were important to both groups. The BSU speaker series began in the spring of 1969 to help educate Hopkins students about the challenges confronted by the black community, and some of the speakers brought to Hopkins were quite radical.

Not all in the faculty or the administration were receptive to the demands of the BSU. One professor, Julian C. Stanley, who was a member of the admissions committee, wrote an “Open Letter on Black Admissions” that scorned several of the BSU’s central demands. Stanley was condescending about the notion of incorporating black studies into the curriculum, and he was hostile to the notion that black students should receive any preferential treatment in the admissions process, writing “I urge you to up your admissions procedures for blacks so that only those in a colorblind admissions procedure would be taken… I believe that most college revolts by black students have been fueled by the academic frustrations of academically under-qualified students exposed to curricula too difficult for their developed abilities.”

Other faculty members were more welcoming of the idea of a black studies program, and others too of the notion of an interdisciplinary black studies program. The BSU, feeling frustrated by Stanley’s letter and by administrative stonewalling, turned to the goal of making the BSU a black social organization. Connections built between JHU and Morgan State University allowed Hopkins students to take black studies classes at Morgan State. JHU did not launch its own Center for Africana Studies until 2003.