During the civil rights era, advocacy by African Americans and the subsequent institution of new federal civil rights laws helped to alter the existing pattern of race relations.

One of the fundamental problems for black students wishing to study at Johns Hopkins was a lack of available housing off-campus in segregated Baltimore. The university, which wished to improve the number of black students in attendance at the university, tried to integrate housing in Charles Village. A sample letter created by the Secretary of the University exists in the files of the Office of the President, dated from December 6, 1965. The letter emphasized the desperate need for housing for Johns Hopkins University undergraduate students, and was composed by Ross Jones, secretary of the University.

“In brief, the university, at Homewood, owns dormitories and apartment houses sufficient to accommodate less than 900 of some 2600 who come to the campus from outside the City of Baltimore. Thus, we are dependent upon you and others for help in finding accommodations for these young people. This staggering problem of placing students in good quarters is compounded when persons refuse to rent their facilities to certain students who may apply to them for a rental-especially negroes and students from abroad.”

The letter foregrounded the university’s efforts to end discrimination on the Homewood campus, which they claimed had been a marked success.

“For nearly a quarter of a century Johns Hopkins has labored vigorously to discard discriminatory practices of the past so that today, on the campus, there is no discrimination of any kind-an atmosphere which is appealing to all who are associated with this institution. Quite frankly we find that traces of discrimination which remain in areas adjacent to the campus are harmful to the University. Such practices discourage students from minority groups and foreign countries from coming to Johns Hopkins and are not in harmony with this country’s social and economic objectives. We find this most regrettable.”

“I earnestly encourage you carefully to examine your own circumstances so that in the future we might feel free to send any of our students to you with the knowledge that you will receive them and consider their application without regard to color, religious preference or national origin.”

Several decades later, Jones described the reaction to the mailing of these surveys to prospective student landlords.

“One of the things that we wanted to stop was discrimination in housing, off-campus housing. At one point we had about eight hundred people who said they'd like to rent rooms or apartments to Hopkins students, and they filled out little cards, and on those cards they could discriminate if they wanted to. So I wrote a letter on behalf of the university to all landlords saying, ''No more discrimination." That number eight hundred dropped to around two hundred overnight. It was the only time in my life I ever got hate mail at home-''nigger lover" and that sort of thing. But that was one of the early things that we did to try to stop that when we did.”

Jones described how Hopkins’ location in segregated and Southern Baltimore appeared to increase the difficulty of recruiting promising black students.

“But Baltimore being Baltimore, you know, I think it was a little harder. I know, I do know that for many African-American students in the North, Baltimore was not an attractive place to come, and I would say in the South also. They wanted to go farther North. It did not appear attractive to them, particularly because we could not guarantee four years of housing, and they had to live in the community. They were worried about where they could find a place to live in the neighborhood.”

On admissions, Dates argued that special efforts have been made across the university in order to recruit a greater number of applications for the class entering in 1966. First, attempts to reach out to mainly black schools were made, though only six out of eight hundred schools accepted to be placed on the JHU admissions mailing list. More direct efforts at recruitment were then made, as personal letters were then sent to 937 black students identified through the National Merit Scholarship Corporation. 90 of these students were then sent preliminary applications, with 45 students eventually submitting applications to the university, some with application fees waived. 15 of these students then began attending the university that Fall of 1966. Dates took care to point out that these students were all fully qualified for the rigor of a Hopkins education. In order to help these black students arrive at Johns Hopkins, Dates and others made a concerted effort to offer generous financial aid, raised through a Barnstormers benefit performance and direct solicitation. Ultimately, $16000 was raised for a "Difference Fund", from which most of these fifteen students drew from for their education, in addition to regular scholarships.

Dates underscored that the most pressing need was for more undergraduate housing for new African American students. One of the very first black students at Hopkins, Ernest Bates, who had graduated in 1958, later described conditions for students living in segregated Baltimore.

“And when I went there to the Greenwood Pharmacy, they would say to me I can't eat at the counter, and if I was ordering a coke and a sandwich or a hamburger, they would bring it to the back door. And my fellow white students were just furious with that, and so what they did is either they wouldn't go there, or, if they went, they'd bring it back for me. And I only did that once or twice when I went to the back door, and they just would not let that happen. Again, discrimination off campus.”

Bates, who would later become a doctor and a trustee of Hopkins, shared more about his experiences at Hopkins in an oral history recorded in 1999. 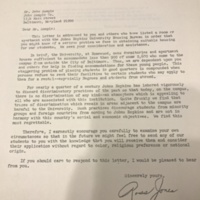 Ross Jones, Secretary of the University, authored this sample letter which was sent to landlords in the Charles Village area in an effort to end off-campus racial discrimination in Housing 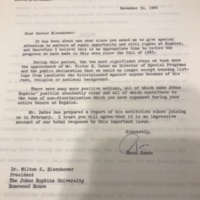 Pressed by the Civil Rights act and by the student white papers, the university hired Victor Dates to perform an assessment of racial conditions at JHU and to recruit new black graduate and undergraduate students

Pressed by the Civil Rights act and by the student white papers, the university hired Victor Dates to perform an assessment of racial conditions at JHU and to recruit new black graduate and undergraduate students 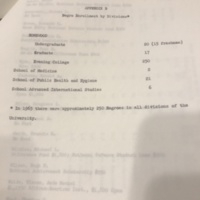 One of Dates' most important assignments was to increase the number of African American undergraduate students at JHU, as tabulated here 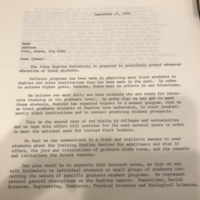 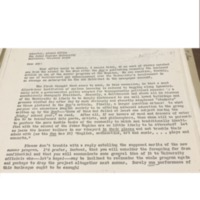 One extremely vehement Hopkins alumnus expressed his feelings about Hopkins' efforts to increase access for African Americans to higher education. This letter reveals much about the racist attitudes of the period