Coeducation and Its Discontents

During the 1960s and in the midst of radical social change, coeducation was instituted at a number of formerly all-male colleges, following the protests of women fighting for their right to an undergraduate education. Johns Hopkins University, like other all-male schools, came under increasing pressure to admit women as undergraduates. Female graduate students had been admitted at Johns Hopkins since a vote of the Board of Trustees in 1907, however no female students had been admitted at the undergraduate level at Homewood.

In a meeting on October 29, 1969, the Homewood Academic Council offered a recommendation to President Gordon “that some women be added to the undergraduate body of the faculty of Arts and Sciences by September, 1970.”

Following this recommendation from the Academic Council of Arts and Sciences, the university assembled a task force to investigate the possibility of adding women to the undergraduate rolls. This task force would look into the feasibility of coeducation for the university in practical terms, assessing what facilities would need to be adapted for use by both male and female undergraduates. These ranged from the question of housing for female undergraduates to access to athletic facilities to additions in staff of health and psychological services, while keeping in mind the potential budgetary consequences of a move to make Hopkins co-ed. Gordon asked that this task force research the experiences of other universities which had recently introduced coeducation. Gordon also hoped that this task force would submit a report by February 1, 1970.

There are several letters of support for coeducation that were attached to the files of the Office of the President related to coeducation. Mark Greenberg, one student at Hopkins, authored a letter to the administration where he called for JHU to become co-ed as a matter of necessity. “As a concerned student, I demand that Hopkins become coed by the fall of 1970.” Another Hopkins student, Bill H., wrote “I feel that the present situation, in which we have no “normal contacts with girls and are forced to limit these contacts to weekends takes away a great deal from the “campus life” which every institution of this kind is so keen on.”

In September 1970, the first female Hopkins undergraduates arrived at Hopkins. Ninety women were admitted to the university as undergraduates, some at the freshman year level and others as upper level transfer students. The first full class of undergraduate women would graduate from Johns Hopkins university in 1974. The President of Hopkins at that time, Steven Muller, decided that women should have a part in that commencement ceremony, and a group of female students worked together to write a commencement speech. The speech discussed some of the hardships faced by these first female undergraduates, and was read aloud by Cynthia Young, one of the female students who had helped to write it.

“Imagine yourself a woman, walking into a classroom, and being addressed as “Gentlemen.” Imagine yourself walking into the gym, and being told that you need a male escort, in order to use the ping-pong tables. Or, imagine yourself ill enough to need the use of the infirmary overnight, and being offered a converted broom closet as accommodation, because men were in the regular hospital room. This was the Johns Hopkins University in 1970 and 1971, when it first began to admit undergraduate women.”

These women described the positive changes which they had helped to make to their institution. The women's center that is mentioned is no longer present at Homewood.

“Despite discouragement, we have grown from our contact with this university, as well as contributed to its growth. We have an active women’s center and our own intercollegiate sports. Women now hold office in some previously male bastions such as the News-Letter, the debate council, and the Student council.”

“Now, after four years of coeducation, we feel the University has a responsibility to future classes, women and men. Johns Hopkins should have a positive admissions policy, which would expend as much energy in actively recruiting women as men. There should no longer be any excuse for limiting the number of women accepted at Hopkins. Many students also feel that there is a lack of women in administrative and academic positions. The University should actively recruit and hire qualified females to fill these places.”

To learn more about the experiences of Hopkins’ first female undergraduates, listen to or read this interview with Mindy Farber, who graduated with a B.A. in History from Johns Hopkins in 1974, and who helped to found the Women’s Center. She describes in detail the difficulties of being among the first women on campus, including inadequate housing and restroom facilities, a lack of women in faculty positions, and sexual harassment from professors. 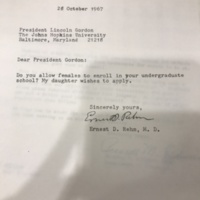 A letter from Dr. Rehm, a man whose daughter wished to enroll at Johns Hopkins 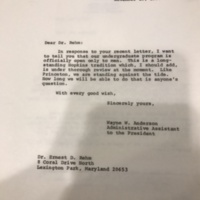 The reply to Dr. Rehm articulates some of the frankly sexist attitudes held by those at the university before women arrived as undergraduate students 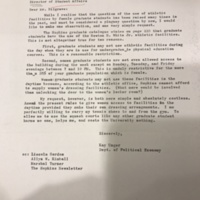 Before the university admitted any undergraduate female students, it admitted several female graduate students for whom it would not have to provide gender-specific housing. These women encountered many difficulties in utilizing university facilities 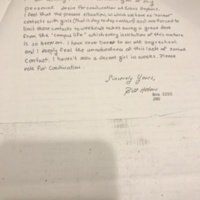 Male students at Hopkins hoped that the presence of "girls" would help to change the stultified social situation at Hopkins. 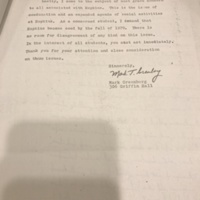 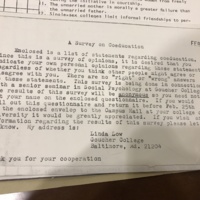 The heading from a survey on coeducation created by a class in psychology at Goucher. Before women became a part of the undergraduate student body at Johns Hopkins, the two schools maintained a closer social relationship than today 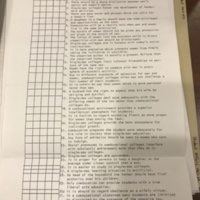 These survey questions illustrate much of the mindset of the period, as women were working to gain social and educational equality 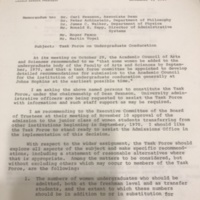 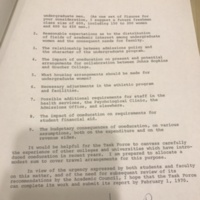 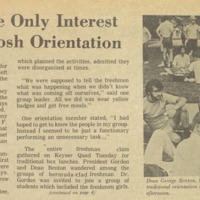 ← Integrating JHU
A Legacy of Student Activism →
Coeducation and Its Discontents