Lincoln Gordon Looks Out on Other Colleges

The Office of the President maintained a file of clippings and images from student protests across the country which helped to educate Dr. Lincoln Gordon about conditions at other universities. Johns Hopkins University had a more mild outbreak of student protest than other colleges and universities such as Columbia University and the University of Chicago, and there was no damage to property in any of the Homewood student protests, but Dr. Gordon remained extremely concerned about the threat of student radicals.

Dr. Lincoln Gordon had a brief and tumultuous tenure as President of the Johns Hopkins University, serving from 1967 to 1971, when he was removed by a no-confidence vote by the Homewood faculty. Gordon had served during a period of intense social and political upheaval on campus, and in the midst of a budgetary crisis that his emphasis on administrative functions may have aggravated. The former U.S. Ambassador to Brazil left the university abruptly, forcing the Hopkins trustees to ask Milton Eisenhower to return as President until a new leader could be found. Steven Muller, who had just been hired as a provost only months before, was ultimately chosen as the next president of JHU, and he would serve from 1972 to 1990. Gordon's exit from the university is described in detail in the Hopkins Retrospective oral history account of longtime university secretary Ross Jones. 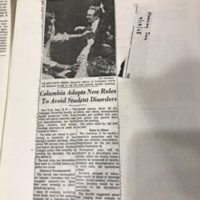 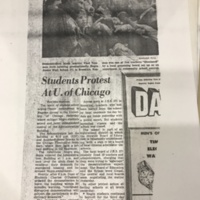 President Gordon and his aides kept a number of clippings from newspaper and journal articles documenting unrest at universities across the country, including the University of Chicago 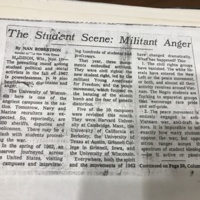 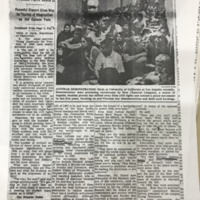 An article on campus protests featuring an image from a protest at UCLA against the Dow Chemical Company. Dow had also been the subject of protests at Hopkins earlier in the 60s. 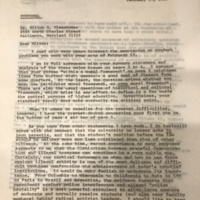 President Lincoln Gordon communicated with Milton S. Eisenhower in this draft letter his thoughts on the role of the university in the lives of its students. Eisenhower, the once and future President of the university, was then chairing a committee on student unrest across the United States 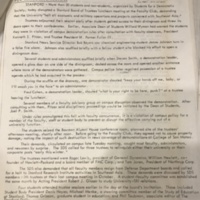 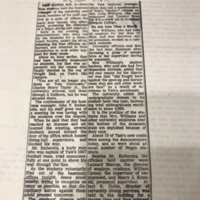 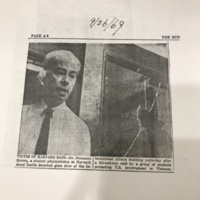 An image that surely must have stayed in President Gordon's mind, that of an administrator standing near a damaged window at Harvard following a student protest 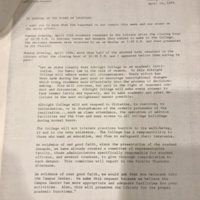