During the war in Vietnam, one of the largest controversies among students, faculty and administrators at Homewood was the presence of on-campus military recruiters for the U.S. Armed Forces. In the Spring of 1970, students and administrators had an intense confrontation over whether the university should permit members of the U.S. Army to visit the campus and to conduct interviews with Hopkins students. Groups such as the Students for a Democratic Society and the Johns Hopkins Strike Committee were against the presence of military recruiters on the Hopkins campus, disagreeing with the war in Vietnam on moral grounds, and feeling that any recruits would be asked to fight this war which they believed was both unjust and unwinnable. Protests had previously been held in 1969 by SDS and the New University Conference against military recruiting, and a recruiting visit from the Dow Chemical Company had also been the subject of a 1968 demonstration by the SDS.

On April 20, 1970, the Hopkins administration was besieged in Homewood House by more than 200 students calling for an end to military recruiting on campus. Demonstrators surrounded Homewood, then an administration building, and threatened to take over the building unless military recruiting was banned on the Homewood campus. Dr. Gordon, arriving from New York on that Friday afternoon, spoke twice to students through a loudspeaker, once to propose a referendum on the subject and a second time to warn against a forced takeover. The university obtained an injunction from the Circuit Court forbidding any meetings or speeches that interfered with normal functions at the university and prohibited the use or threat of force.

On April 21, 1970, a memorandum was sent to all students, faculty and administrators from the office of the president. On this day following the disruptions of the 20th, Gordon had chosen to clarify the situation of military recruitment on the Homewood campus, perhaps in the hope of soothing tensions among the student body.

Gordon reiterated that placement interviews were performed as a service to students and alumni, and that all interviews were entirely voluntary. Gordon wrote that interviews were permitted by "any employer, governmental or private, engaged in legal activities," and that no representatives of the armed forces were scheduled for the remainder of that academic year.

Gordon then discussed the protest that had taken place at Homewood House the previous Friday, which had demanded his immediate declaration to forbid further placement interviews on campus by military recruiters. He repeated that he would only make such a choice after a broad canvass of student opinion on this subject by referendum.

On April 22, the Johns Hopkins Strike Committee, an emergency committee against the war in Vietnam, began a strike which would last until April 24. This successful strike forced Gordon to suspend military recruitment on the Homewood campus pending the promised referendum. This referendum, a ballot from which is preserved in the Hopkins archives, was held on May 1. With a vote of 1183 to 1121, it was decided that the representatives of the Armed Forces would no longer visit the Homewood campus. The News-Letter described this vote as the "largest and closest vote in memory," as it represented the voices of 70 percent of full time students and faculty at Homewood.

This referendum was by no means the end of campus unrest at Johns Hopkins. It was in May 1970 that President Richard Nixon ordered the invasion of Cambodia and four student protestors were killed at Kent State University in Ohio. New strikes and protests were called and new pamphlets issued near the end of this tumultuous school year, and President Gordon personally registered his concern over the war to Maryland’s congressmen in Washington.

The democratic decision to end military recruitment on campus would lead to a crisis unforeseen by either students or administrators as a punitive act of Congress was passed which threatened to badly harm the university. In October 1970, a new section 510 of the Armed Forces Recruitment and Defense Department Authorization Act forbade the Department of Defense from spending its funds at any university which barred military recruiters from its campus. At this time, the Johns Hopkins University was in the midst of a financial crisis, and the possible loss of important contracts across all divisions of the university would cost not only money, but also livelihoods and essential research. The referendum on campus recruiting had included only Hopkins undergraduate students, but students at the school of Public Hygiene and the Johns Hopkins Medical School were also concerned by these imminent cuts.

After much review and many memoranda, the Board of Trustees ultimately decided to reinstate on-campus recruiting for the sake of the university and its treasury. The memory of this federal interference in the university, however, was not easily forgotten, and Dean George Benton foresaw only more trouble in the increasing presence of the federal government in higher education. 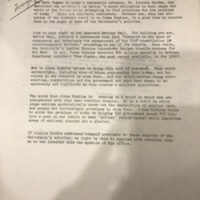 From 1968 on, the JHU Strike Committee agitated for an end to Hopkins' complicity in the war in Vietnam 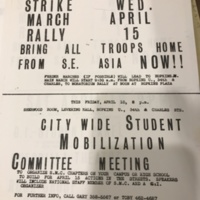 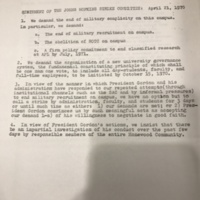 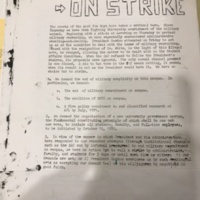 This flyer, issued in the midst of the three day strike over military recruiting at Homewood, repeated the demands of the Strike Committee and its allied groups 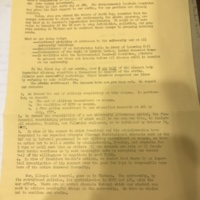 An April 23, 1970 flyer from the JHU Strike comittee from the middle of the strike 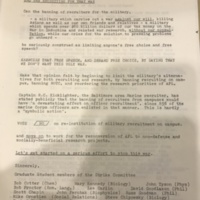 The Strike Committee had both a graduate and an undergraduate division, and both encouraged the continued suspension of military recruiting on campus 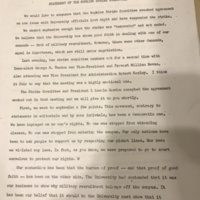 On April 24, the Strike Committee released a statement describing why it had ended its strike at Homewood,  detailing the settlement it had reached with the university, and looking forward to the referendum vote on May 1 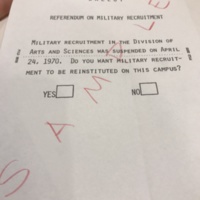 A sample ballot from the military recruiting referendum of May 1, 1970 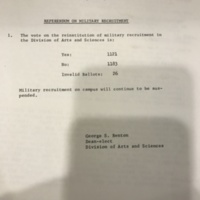 The results of the campus-wide referendum on the suspension of military recruiting barred recruiters of the Armed Forces of the United States from the Homewood Campus. 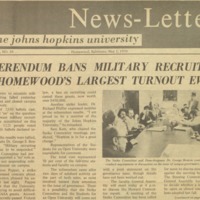 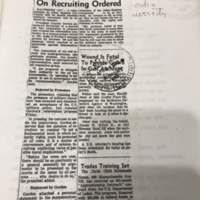 The crisis at Hopkins had attracted the attention of local newspapers, including the Evening Star 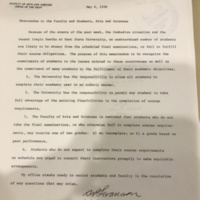 Following the escalation of the conflict in Vietnam in May 1970 with the bombings in Cambodia, as well as the killing of four student protesters at Kent State University in Ohio, students at Homewood were deeply shaken. The administration, which also shared concerns over the crisis in Cambodia, attempted to be understanding of the possible distress of students. 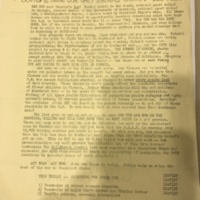 Dean George Benton's memorandum on the question of military recruiting and university finances foresaw further interference by the government into university policies.

Despite the referendum results, the financial threat of withdrawn contracts from the Federal government would force the university and trustees to reopen the campus to military recruiters the next Fall. The lifting of the ban was reported in the JHU News-Letter 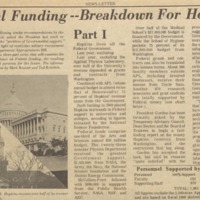 The student body was aware of the precarious situation of the university vis-a-vis government funding, as shown in this News-Letter article from October of 1970, one section of a three part series on the subject 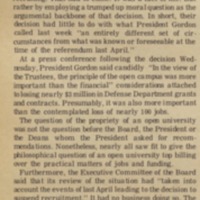 An editorial from the News-Letter's October 16, 1970 edition accused the JHU Board of Trustees of having overruled a dermocratic decision by the majority of students while exercising an attitude of moral superiority