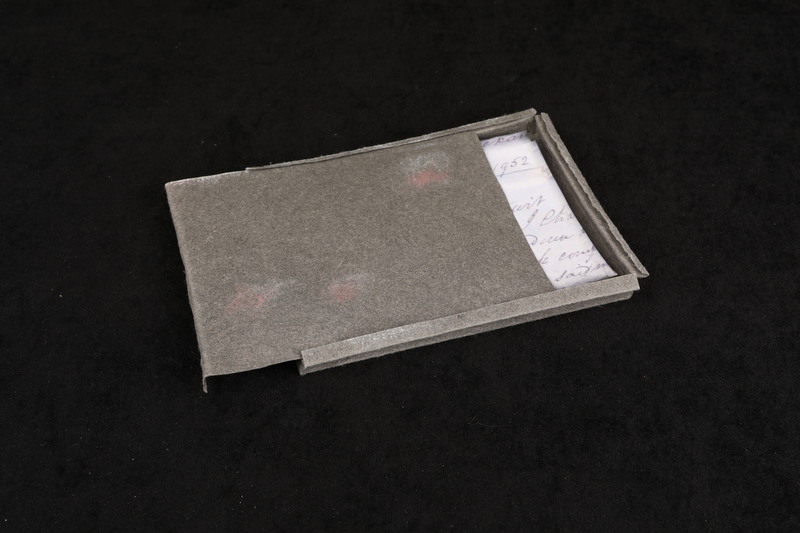 A replica of a wallet fashioned out of tin containing “Freedom Papers.” It belonged to Joseph Trammell, a free Black man who lived in the state of Virginia in 1852. Trammel’s papers guarded him against becoming someone’s property but did not guarantee him an authentic freedom.

Replica by Martha Edgerton.  The original is in the Collection of the Smithsonian National Museum of African American History and Culture, Gift of Elaine E. Thompson, in memory of Joseph Trammell, on behalf of his direct descendants

Using contemporary book art and documents drawn from the JHU archives, “Freedom Papers” highlights the stories of Black people who redefined freedom for themselves and others.  Acting on their own resolve, the people featured here show that freedom is never given but is something one claims and lives.

The exhibit’s title comes from the antebellum South.  There, free Black people produced “freedom papers” as proof of their right to move and remain safe from enslavement. Because these documents could be withdrawn on a whim or even ignored, Black people lived a precarious kind of freedom that was often set by others.

The stories selected for this exhibit offer a different frame. The “Freedom Papers” presented here highlight Black autonomy, self-determination, and an audacity to act in the face of U.S. racism. For the Black people featured in this exhibit, their actions illuminated the contradictions embedded in American society and, ultimately, redefined freedom for all of America. Black assertions and day-to-day exercises of freedom served as proof of American freedom – becoming, ultimately, our nation’s new Freedom Papers.