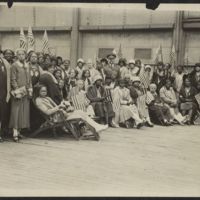 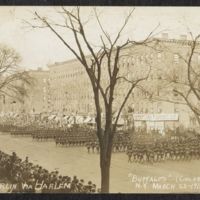 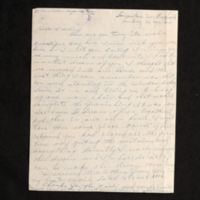 As U.S. forces fought for democracy during World Wars I and II, many Black men and women used military service to assert and claim freedom.   The American military openly challenged the fitness of every Black soldier to fight for the nation.  Both world wars presented opportunities for Black Americans to demonstrate their patriotism and assert their humanity in the face of such treatment, the hardening of Jim Crow segregation, expanded disenfranchisement, and racial violence.

To combat second-class citizenship, Black men affirmed themselves as citizen soldiers. Black mothers and widows also organized and invoked their familial sacrifices to lay claim to government entitlements such as commendations for deceased veterans and military pensions.  During World War II, African Americans began the Double V Campaign to fight for freedoms abroad and at home, from European fascism and Jim Crow segregation.

In more quiet moments, Black men and women wrote letters and exchanged photographs preserving their lives’ greater meaning and purpose and ensuring a measure of racial pride.  From direct protests to letter writing, Black America was determined to be seen and treated like everyone else – as human.