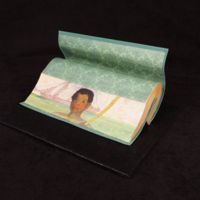 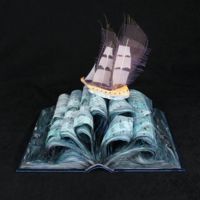 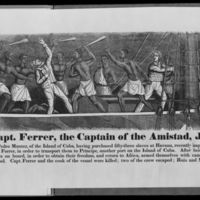 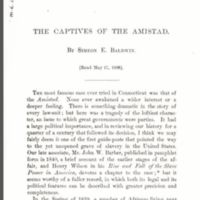 Cinque led a mutiny and revolt aboard the slave ship Amistad.  This assertion changed both law and history, energizing the abolition movement.

Born in West Africa among the Mende people c. 1814, Sengbe Pieh [Joseph Cinque] was the son of a local chief, a rice farmer, husband, and father.  In 1839, slave traders captured Cinque, took him to Cuba and falsified official records to suggest that Cinque had been born into slavery.  Through their scheme, the traders avoided treaties that prohibited the Transatlantic Slave Trade.

On July 1, 1839, Cinque led 53 fellow enslaved Africans in mutiny on The Amistad and attempted to return to Sierra Leone. Dithering two months at sea, The Amistad was captured by the U.S. Coast Guard.

In the legal case that followed, United States v. The Amistad, Cinque and his countrymen were found not to be property but free men and women.  They were acquitted of mutiny and other charges and set free.

Cinque’s courage emboldened the abolitionist movement.  His Supreme Court case affirmed for the first time, the “equal rights of all foreigners…to equal justice…”

← Introduction - Freedom Papers: Black Assertions From the Archives
Cinque In His Homeland →
Story of Cinque