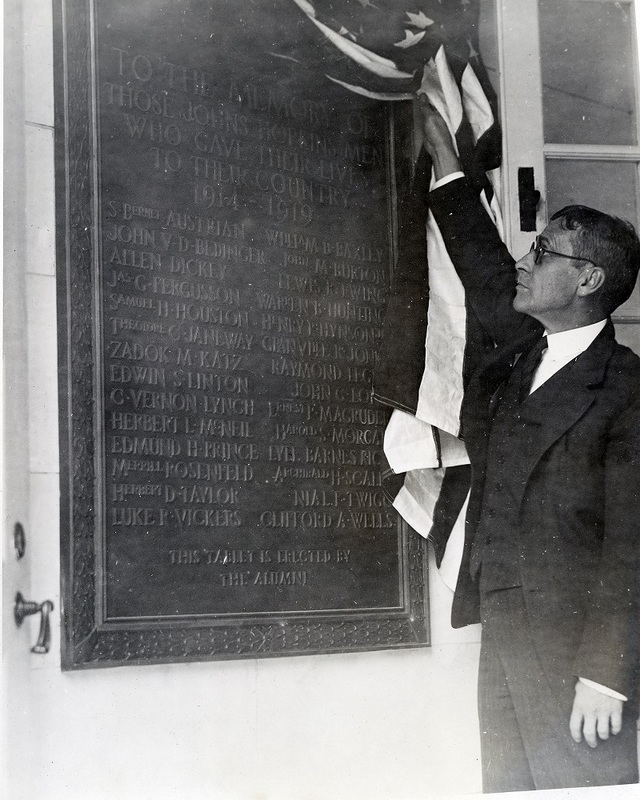 Unveiling of World War I commemorative plaque in the Alumni Memorial Dormitory, 1926

The military collapse of the Central Powers in fall 1918 brought active warfare to a close, though the repercussions of the war continued for many in the Hopkins community. The Paris Peace Conference was convened by the Allied powers to determine the terms of peace for the defeated parties. This conference resulted in the creation of the League of Nations, peace treaties including the Treaty of Versailles with Germany, the redrawing of national borders, and the creation of new nations. US President Woodrow Wilson (PhD, Johns Hopkins University, 1886) represented the United States as part of the “Big Four” group of nations that dominated the conference proceedings. Isaiah Bowman, director of the American Geographical Society and future Hopkins president, served in Wilson’s contingent as Chief Territorial Specialist.

On the Homewood campus, faculty and students serving in civilian and military roles returned to campus at the war’s end to resume their work and studies. There were new faces on campus, too: the Federal Board for Vocational Education funded the education of disabled veterans at Hopkins and other schools, so that they could gain the knowledge and skills required to be contributing members of the workforce.

The physical landscape of the university changed as well. Buildings that housed the Student Army Training Corps reverted to teaching and research space. Hopkins’ first dormitory, completed in 1923, was christened the Alumni Memorial Dormitory in honor of the Hopkins men who died in wartime service. 1923 also marked the start of the Tudor and Stuart Club, which was endowed by a renowned Hopkins doctor in memory of his son who died in the war. A portrait of his son in uniform still hangs in the club’s original meeting room in Gilman Hall. Though a century separates us from this devastating global conflict, our campus still bears reminders of its profound impact on the Hopkins community.