Anna the Dog and Animal Experimentation

Animal experimentation was fundamental in developing the blue baby procedure. Long controversial, it had become a flashpoint in Baltimore during the first decades of the twentieth century. Public protest was often directed at Hopkins, the city’s leading research institution. Physicians countered that lifesaving treatments for humans depended on the sacrifice of laboratory animals. The dramatic recoveries of “blue babies” showed what was at stake in this difficult moral calculus. 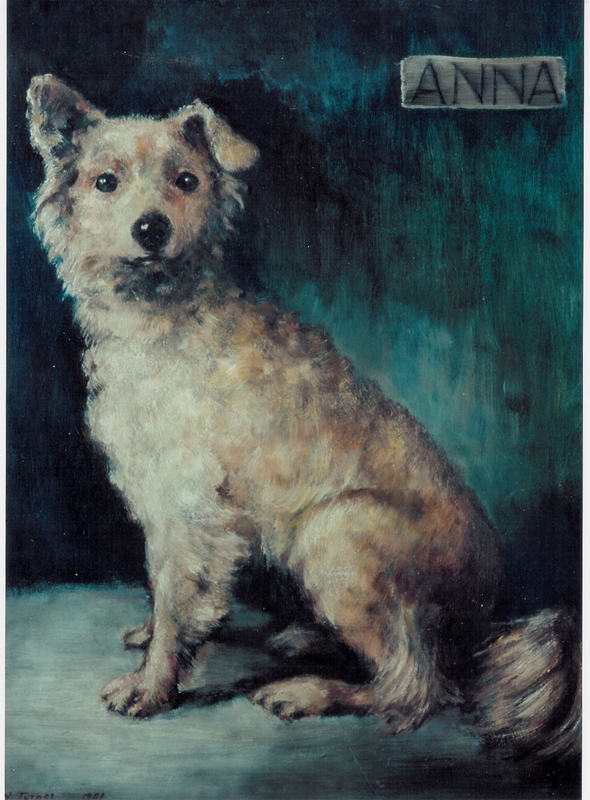 Portrait of Anna the dog by DeNyse W. Turner Pinkerton, 1951.

A dog named Anna became the official mascot of the blue baby procedure. She was the first dog to survive the surgical simulation of Tetralogy of Fallot and the restorative pulmonary-bypass shunt. After this groundbreaking success, Thomas retired her from research and she lived in the surgical laboratory as a pet, beloved by staff and visitors. The Baltimore Animal Aid Association, a group that supported humane use of lab animals, commissioned her portrait in 1951. Journalists often photographed her with former blue baby patients, a touching picture of animal service and human gratitude.

Placing Anna in the spotlight was a bold move; critics would point out that many other laboratory animals did not survive. However, Anna’s image proved effective in assuaging discomfort and showing the direct benefits of experimental work. Vivien Thomas had great respect for the well-being of laboratory dogs, and this was reflected in his lab’s research practices. Local veterinarians occasionally asked him to perform difficult procedures on their canine patients; in these instances, Thomas’s skill and experience allowed him to save animals’ lives.