Levy obtained his music through various means-- whether auction, trade, or lucky find at an antique store. He also belonged to a large group of sheet music collectors that would often gather at each other's homes to discuss music (and even trade). In a letter to a colleague about the Star Spangled Banner (shown later in this exhibit), he tells the following story:

"After a few rounds of drinks, we all began to brag about our collections. One of the 'boys' boasted, 'I value my collection at $12,000,' whereupon in the flush of excitement I yelled, 'Why, I'd give you $12,000 for it,' and he immediately yelled back, 'Sold!' Instantly, we both sobered up when we realized the extent of the transaction. Each of us had our particular cronies, and in each case we were advised, 'You've got a good deal. Go through with it.' So we did; and that's the story."

Nowadays, with the collections of most 20th century sheet music collectors residing permanently at public libraries and universities, the collecting community has become much smaller-- whereas rare songs were frequently surfacing in the 20th century, most of these gems have now been found. However, sales of sheet music can still be found on online auction sites such as eBay, with rarer songs going under the hammer at major auction houses. 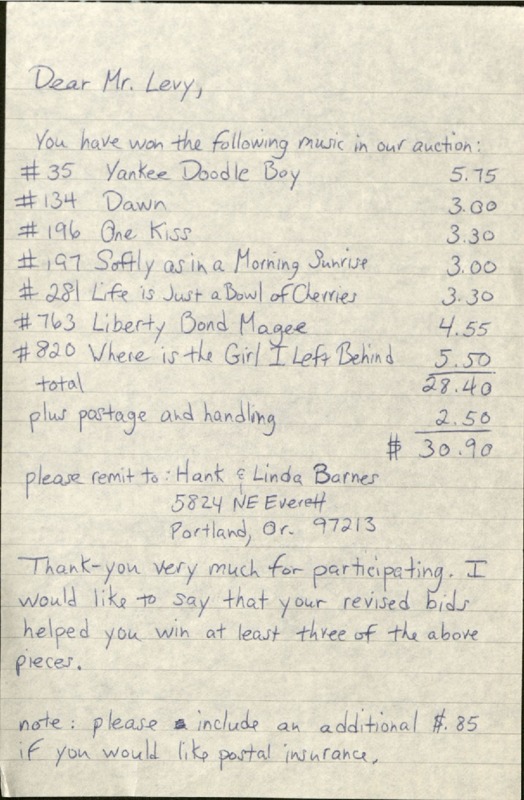 One of the main ways Levy obtained songs was through auction. This letter from auctioneers Hank & Linda Barnes lists 7 songs he won at an unknown date.

It also illustrates the complicated process and lengthy snail-mail communications associated with obtaining songs at auction. Levy would first receive an auction catalog (often extensive-- this auction had at least 820 songs), then send his bids. Upon receiving a letter like this one, he would send payment and wait to receive the actual sheet music, before inspecting it for quality. If he found a seller had misrepresented the condition of the music, he might send it back and request a refund.

Over the years, Levy developed close relationships with many popular auctioneers and music sellers, who would often proactively reach out if they came across a song they knew he'd be interested in.  In fact, Levy obtained his prize possession, a first edition of the Star Spangled Banner, by referral from his friend Elliott Shapiro. Levy's collecting priorities were extensive and varied, ranging from single composers (Irving Berlin) to complete Broadway show collections to songs of the Confederacy. 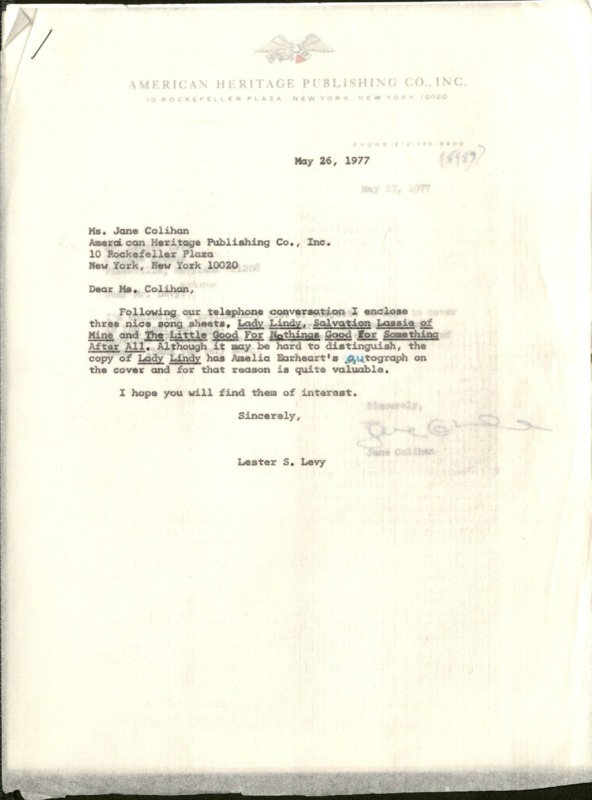 Looking at the cover of Neely & Levey's 1928 song, "Lady Lindy We're All For You," it's almost impossible to distinguish the signature in the center. Even so, sheet music in historic collections is full of signatures. As most of these songs were first obtained for personal use and performance, they often have the signature of the original owner. Many songs also had celebrity songs as part of the original lithograph or engraving, so it can be difficult to tell if a signature is from the original owner or a celebrity. However, this letter from Lester Levy is the only clue pointing to this song's unique history. It's unclear what the circumstances were for Earhart signing the song or Levy obtaining it. By comparing the cover of this song with duplicates in other collections and comparing the signature to verified signatures by Earhart, this signature appears authentic (it is visible below, to the left of Earhart inside the oval).

Lady Lindy We're All For You. Signed by Amelia Earhart