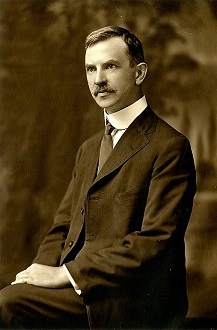 E. Emmet Reid received a PhD in chemistry from Johns Hopkins in 1898, studying under chemist and future Hopkins president Ira Remsen. He later taught chemistry at Hopkins from 1908-1937. In 1917-1918, Reid was recruited by the government to do research in chemical warfare on behalf of the war effort, alongside 2,000 chemists from around the country. He and other Hopkins chemists worked at the American University Experimental Station, the home of the US chemical weapons program during the war in Washington, DC. The chemists manufactured and tested mustard gas and Lewisite, an arsenic-based poison gas. Reid is credited with the invention of tear gas during this time. The items displayed here include Reid’s student notes from Ira Remsen’s Hopkins chemistry lectures and the letter appointing him to the chemical warfare research program. 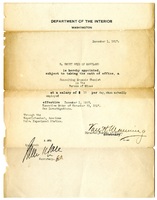 Department of the Interior memo, 1917