The Rosa Ponselle statue by Alexander Stirling Calder, unveiled in 1929.

As Giulio Gatti-Casazza had predicted upon offering Rosa Ponselle her first contract, she opened the doors of the Metropolitan Opera--and the doors of major opera houses everywhere--to American-trained singers. Those open doors even welcomed many of the singers she herself taught, coached, and mentored here in Baltimore as the artistic director of the Baltimore Opera Company.

Ponselle's lasting presence can be observed in the world of opera and beyond. She is the subject of multiple biographies and grand painted portraits, a New York City subway mosaic at the Lincoln Center stop, and a series of United States Postal Service stamps and envelopes. Halls of fame in Maryland and Connecticut have inducted her, and her photograph appears on in the lobby of the Metropolitan Opera. In a series of four contemporary muses in acting for the I. Miller Building in New York City unveiled in 1929, Alexander Stirling Calder depicted her in a statue representing opera.

Her colleagues remember her fondly and with reverence for her supreme talent:

“Ponselle looked back at her own accomplishments in unabashed wonder… ‘Geraldine Farrar once said that voices like mine came from God.’”

"There were many unforgettable hours upon the stage, during which, instead of thinking of my own role, I would be lost in the dark splendor of her voice." – Ezio Pinza

“‘You knocked the “elle” out of Ponselle,’ Ponselle herself quipped in complimenting Lily Pons when the French tweety-bird made her Met debut. ‘Mais, Rosa,’ La Pons reportedly countered, ‘Pons is only half a Ponselle.’”

“Rosa Ponselle was a sublime singer a most outstanding voice.” – Elisabeth Rethberg

“Ponselle is the greatest Carmen since Emma Calvé.” – Mary Garden in a telegram to Grace Moore

“I think we all know that Ponselle is simply the greatest singer of us all.” – Maria Callas

“As a boy in Italy, growing up in my home town, Modena, I can hardly remember a time when the name Rosa Ponselle was unfamiliar to me. Even though this Queen of Queens had sung only one opera in Italy in her entire career—an incomparable La Vestale, two performances of which Florence audience heard in 1933 at the first Maggio Musicale—the Italian people revered her as if she had sung all her great roles there. In Italy and in every corner of the world, her phonograph recordings assured her immortality, and it was as a young student that I first heard them.” – Luciano Pavarotti in the Sun Magazine, 1982 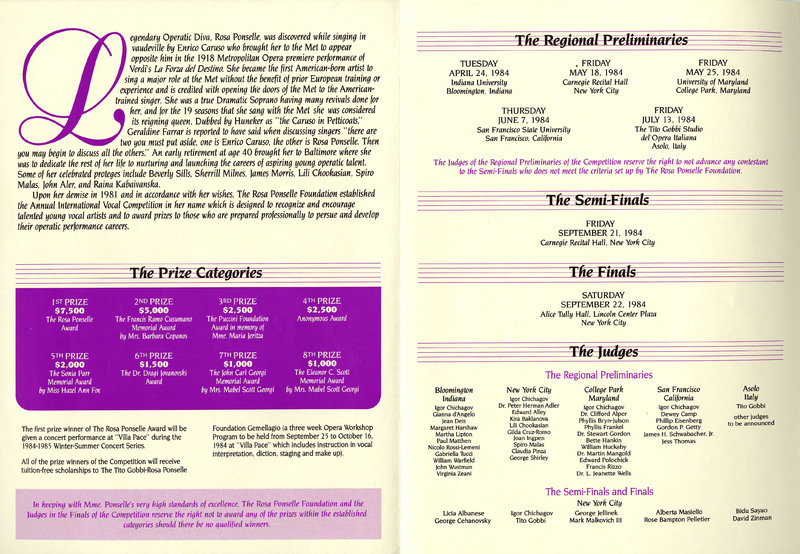 A Lasting Impression in Two Hometowns

The Rosa Ponselle Fund of Meriden was established by a bequest from Ponselle’s estate “for a musically oriented project for the education and benefit of the community of Meriden.” In 1999, the fund signed an agreement with the Lester Dequaine Foundation to form the Rosa Ponselle Museum for Opera, dedicated to the acquisition, preservation, and display of artifacts relating to Ponselle and the opera world of her time. The fund then began using its annual income to sponsor and conduct a competition for the annual Rosa Ponselle Vocal Scholarship, the winner of which would give a concert for the Meriden community. The museum closed its doors in 2007 and the contents of the collection were later donated to the Arthur Friedheim Library at the Peabody Institute in 2015.

The Rosa Ponselle Charitable Foundation was initiated in 1982 with Elayne Duke, a long-time family friend and Rosa Ponselle’s personal representative for the last four years of her life, as the director. The foundation established Villa Pace as a museum and created two competitions as stipulated in Ponselle's will. The Biennial Rosa Ponselle International Competition for the Vocal Arts began in 1984 and was designed to recognize and encourage young, developing singers through study grants, living stipends, cash prize awards, and concert appearances at Lincoln Center and Carnegie Hall. From 1992 to 2001, an annual Rosa Ponselle “All Marylanders” Competition for Young Classical Singers awarded grants and scholarships to winning participants. The museum at Villa Pace closed its doors in 1986 so that the Foundation could focus its resources on the competitions. Many of the artifacts were sent to museum in Meriden in 1998 and are now part of the collection at the Friedheim Library. 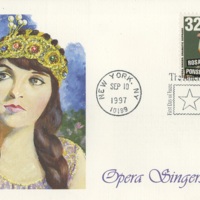 Painted envelope of Rosa Ponselle by George Sottung for the stamp series, 1997. 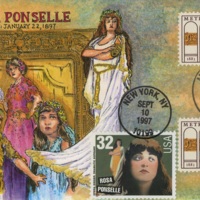 As a star soprano around the peak of opera's popularity in the United States, Rosa Ponselle was introduced to scores of celebrities from the music world, many of whom became dear friends. 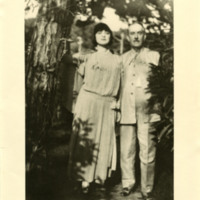 Rosa Ponselle with Giacomo Puccini at his estate in 1924. 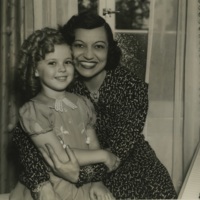 Rosa Ponselle with Shirley Temple in 1936. 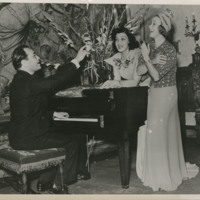 Rosa Ponselle with Anna Moffo and other banquet guests, 1950s. 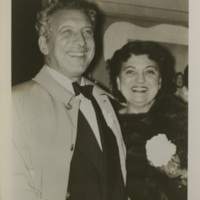 Photograph of Rosa Ponselle with Ezio Pinza in 1953 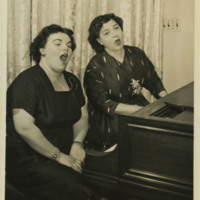 Rosa Ponselle and Eileen Farrell before a broadcast, 1954. 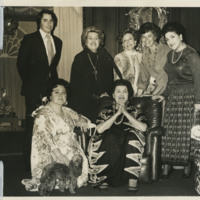 Rosa Ponselle surrounded by friends and colleagues on her 81st birthday, 1978. 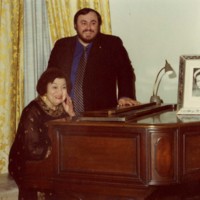 With Luciano Pavarotti at Villa Pace, around 1980.