A New Home in Baltimore

Built in Baltimore County, the Italian-style Villa Pace was designed specially for Rosa Ponselle and became her home from 1940 until her death in 1981. She named the estate after the famous aria "Pace, pace, mio dio" from La Forza del Destino, which clinched her first contract with the Metropolitan Opera in 1918. 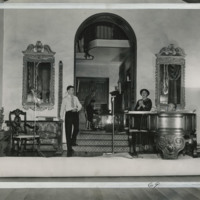 Rosa Ponselle and Romano Romani in a recording session at Villa Pace, 1952. 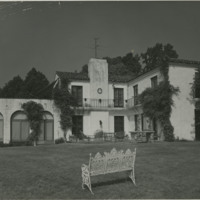 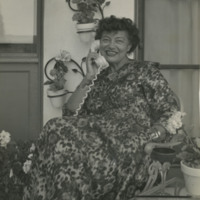 Rosa Ponselle relaxing on the patio at Villa Pace, 1959. 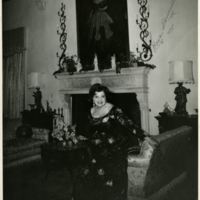 Rosa Ponselle at Villa Pace, 1975. A Chandler Ross portrait of Ponselle in La Traviata hangs above the fireplace.

Purchased on her 43rd birthday in 1940, Villa Pace helped solidify Ponselle's relationship with Baltimore. Brought to the city because of an ultimatum from her husband Carle's father, the mayor of Baltimore, Rosa fell in love with the rolling hills of Greenspring Valley. She began to design a home in the style of the villas she had seen in Tuscany, featuring smooth stucco, a red tiled roof, ornate wrought ironwork, massive windows, and high ceilings. Villa Pace was built in the shape of a cross both for religious reasons and to allow for excellent ventilation and separation between wings of the home. 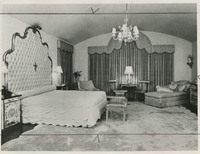 The first floor included a music room, library, dining room, enclosed porch, guest quarters with bathroom and mirrored dressing room, immense kitchen and adjoining breakfast room, and an apartment for a butler and a cook. The focal point of the first floor, the center of the cross, was a huge 15-by-18-foot foyer whose vaulted ceiling rose 22 feet. The basement was a cedar-lined storage room to store Ponselle's Metropolitan Opera costumes, most of which she had designed for herself and purchased.

The second floor had a master bedroom that was 28 feet long with an adjoining bathroom and separate dressing room for Ponselle. There was also a second guest suite with bath and dressing area, and Ponselle's husband had his own dressing room, bath, and wardrobe storage area. The surrounding grounds held three garages, a 60-foot swimming pool (spring fed to accommodate Ponselle's love for cold-water swimming), tennis courts, a horse barn, a chicken house, a meat house, and a dairy building.

After Ponselle became involved with the Baltimore Opera Company, Villa Pace became a site for voice lessons, rehearsals, costume fittings, housing for visiting artists, and the home of many of the production parties and gala evenings.

Party guests would poor into the foyer as they awaited Rosa Ponselle, who would eventually descend the grand staircase in a beautiful gown, often preceded by a herd of galloping poodles. In the dining room there would be silver platters spread with an array of delectable food including "Chicken Ponselle." This was an Edward Byer creation: a pasta dish made with linguine and prepared with a cream sauce of sauteed mushrooms, green olives, grated cheddar, finely cut chicken, and dry sherry.

During all parties, and there were many to celebrate show openings and closings as well as birthdays and Christmases, there was singing and sometimes dancing, but always great conversation, a buzz of laughter, sometimes dancing, and if the party was in the daytime there would be swimming and tennis matches on the grounds.

On the occasion of Ms. Ponselle's 80th birthday, a surprise party was organized. She reads telegrams and letters from President Ford, Vice-President Rockefeller, Mamie Doud Eisenhower, and many, of course, from the musical world in the library while a crowd gathers in the foyer and CBS television crews are setting up lights and sound equipment. She is overwhelmed by the guests which include Francis Robinson, Licia Albanese, Rose Bampton, Wilfred Pelletier, Russell Wonderlic, Clementine Peterson, Ric Aloi, and even Igor Chichagov. After conducting interviews for the television crews, more drinks are served and everyone gathers around to listen to a tape recording which includes greetings from people from all over the world. These include messages from Joan Sutherland, James Morris, Renata Scotto, Marilyn Horne, Niccolai Gedda, and, of course, Pavarotti who promised to keep her age a secret "because you don't look like it, and because I am an Italian and a gentleman...and to me you will always look like you did when I met you at your lovely house."

In her interview she stated "'Now that I have had time to read what has been written about opera and opera singers,' she says, 'I think I can honestly say that I am considered one of the artists who the critics seem to think are the great ones. But, don't forget, I'm only one among many.' Washington Post critic Paul Hume, standing near Francis Robinson, is heard to say in a stage whisper, 'If there are more around like her, I'd like to know where to find them!'" 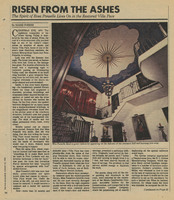 Partial article from The Baltimore Sun article highlighting the restoration of Villa Pace and its opening as a museum in 1982. 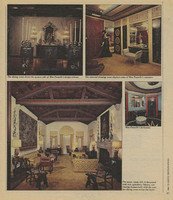 The Museum at Villa Pace

In her will, Ponselle stated that she wished for the house to become a museum after her death. The Rosa Ponselle Foundation, chaired by Elayne Duke, helped restore the estate, which was badly damaged in a fire in 1979, and operated a museum from 1982 to 1986. The house, which was originally to be bought by the City of Baltimore to be preserved a historic site, was then sold at auction and is now privately owned.