While iconic characters like Batman and Spider-Man were mesmerizing readers with their dual identities and crime-fighting ways, an alternate comic book timeline was booming, featuring the adventures of airline stewardess Bonnie Taylor, tragically unhappy actress Lisa St. Clair, and countless other female characters seeking love and fulfilling relationships in the pages of romance comic books. Popular from the late 1940s to the mid-1970s, romance comic books introduced teenagers to the joys and heartache of love. Featuring advice columns, fashion spreads, and allegedly true stories of romance, teenagers could be whisked away to a more glamourous and mature world for as little as ten cents.

Students enrolled in the Intersession course Romancing the Comic Book received a whirlwind introduction to the development of the romance comic book genre and analyzed numerous issues to see exactly how its love stories were shaped by popular culture and social change. For this online exhibit, students have selected comic book cover art exemplifying a variety of topics. While one should never judge a book by its cover, the cover art is meant to entice its viewer to pick up an issue and get lost in a world of romance, be it by finding one's love at Woodstock or equating love as nothing but a flood of tears!

The Sheridan Libraries' Department of Special Collections began acquiring romance comics during the summer of 2021. The collection contains over 200 issues, including such titles as Falling in Love, Girls' Love Stories, Teen-Age Romances, and Young Romance. You can view cover art from the entire collection online. 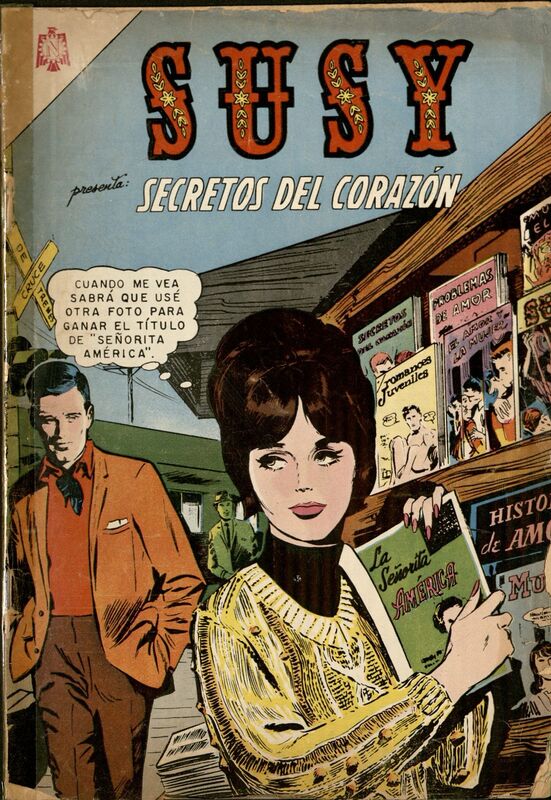 Susy Presenta: Secretos del Corazon is a Spanish-language romance comic book featuring a variety of stories from DC's stable of romances, including Heart Throbs, Secret Hearts, and Young Romance. This cover shows a young woman browsing a magazine rack stocked with romance comic books. The comic book she is holding features an ad for DC's Young Miss America contest. As shown on the cover, purchasing a comic book could be quite an emotionally-draining public act!