Romance comic books were a genre consistently marketed to women. Thought they constantly examined the relationship dynamics between those of the opposite sex, rarely did they focus on the platonic relationships the women would also participate in. Of those that were showcased, other women were often seen as potential competition rather than companions or confidants. More often than not these comic books were written and designed by men, therefore many of them showcase common stereotypes of how women interact with each other centered on the male perspective. The collection examines the cover art of romance comic books and how it portrays the relationship dynamics between two women. 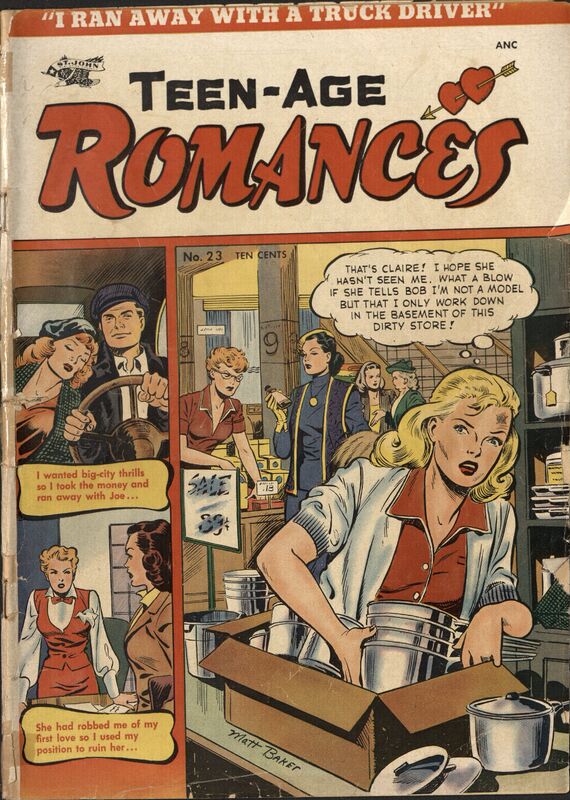 On most covers women rarely have conversations with each other but instead have thoughts or one-sided conversations. This is one of the few issues in our collection where women are depicted on the cover as having a conversation with one another. The three women that are friends are seen engaging in a demeaning conversation about another woman. This lends to the idea that women primarily engage in gossip and shows early examples of the “not like other girls’ trope by having the heroine be the topic of conversation.

The cover art is by Matt Baker, one of the few African American illustrators of the pre-code comic book era.

“His Kind of Chick” depicts a modestly dressed blonde girl looking at the relationship between a biker and another woman with feelings of longing. Her primary drive for the story is to change into her rival to steal the man’s attention. This issue and many more romance comic books of the time focus on feelings of jealousy between women as a source of conflict, some of which focus on the idea of changing oneself to conform to what is thought to be ‘his type.’ In this story, the biker is an undercover agent and "his kind of chick" is really modest and conservative. 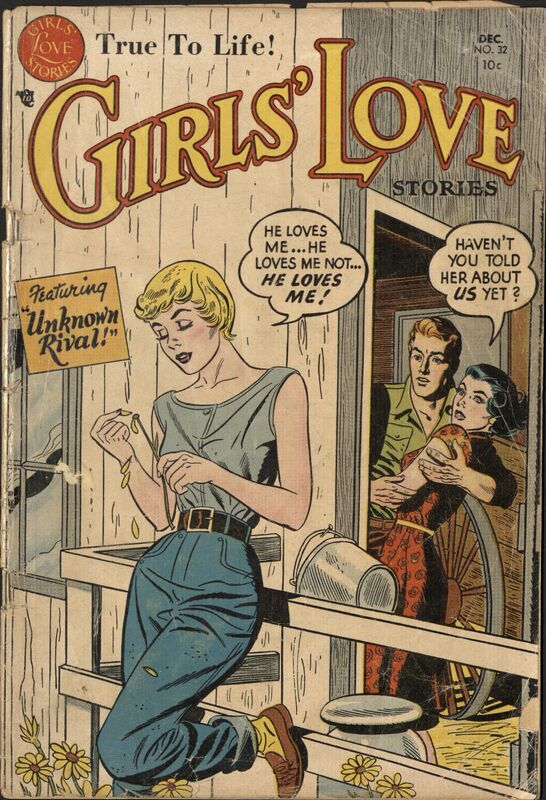 The concept of a “man stealer” is not new. Throughout time the theme of adultery and dishonesty in relationships has been a constant theme. When this is depicted on comic book covers often one of the women involved in the love triangle knows about the situation while the heroine is typically none the wiser.  The ‘man stealer’ trope plays upon the idea that other women are merely obstacles rather than ideas of female empowerment and solidarity. 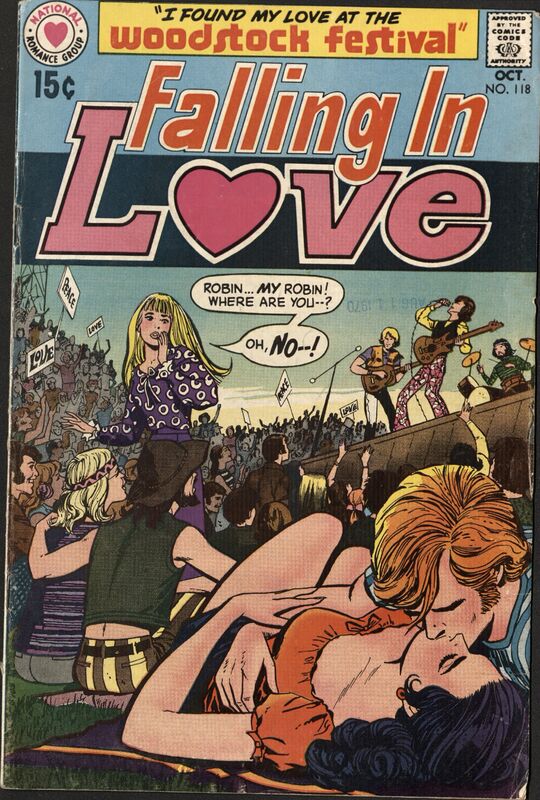 When looking at the covers of romance comic books the authors want the audience to be able to identify who the heroine is upon first glance. With the love triangle troupe this can be easily displayed though the clothing and positioning of the females depicted as scene in ‘I Found My Love at The Wood Stock Festival’. Thought the context of societal standards and cliches, the blonde can be easily identified as the heroine. Compared to the other prominent female on the cover, the blonde woman is dresses in modest attire typically associated with the good girl aesthetic. In contrast the other woman is depicted with a low-cut blouse, short sleeves, and a short skirt with legs prominently shown. We are meant to believe the black-haired female is more promiscuous and therefore less desirable as a long-term partner. 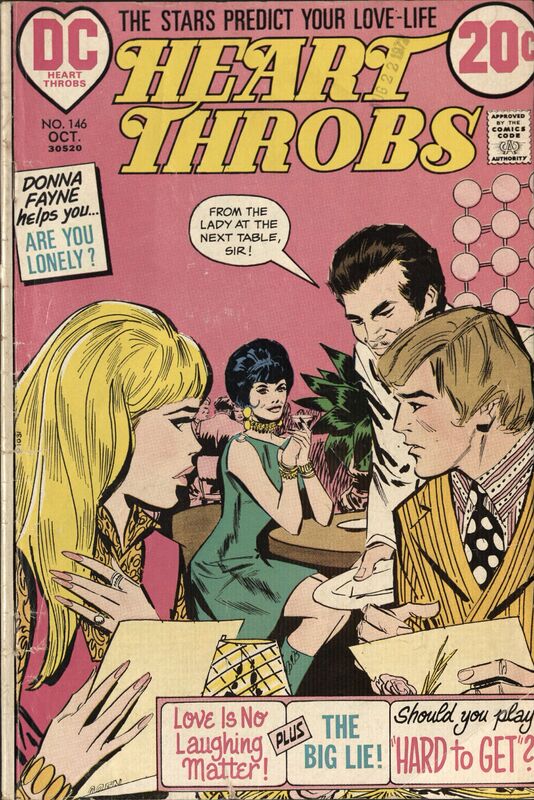 The final issue of Heart Throbs showcases a couple on a date being interrupted by a woman. The woman buys the man in the relationship a drink as a method of drawing his attention away from his date and towards her. Many of these romance comic feature conflict between two women at the forefront. If two women are to have a conflict, it will always center on a man. The world of women in early romance comic books revolve around obtaining and maintaining a relationship with a man. Due to this being their primary ambitions this often leads to their relationships and conversations with other women centering on that too. 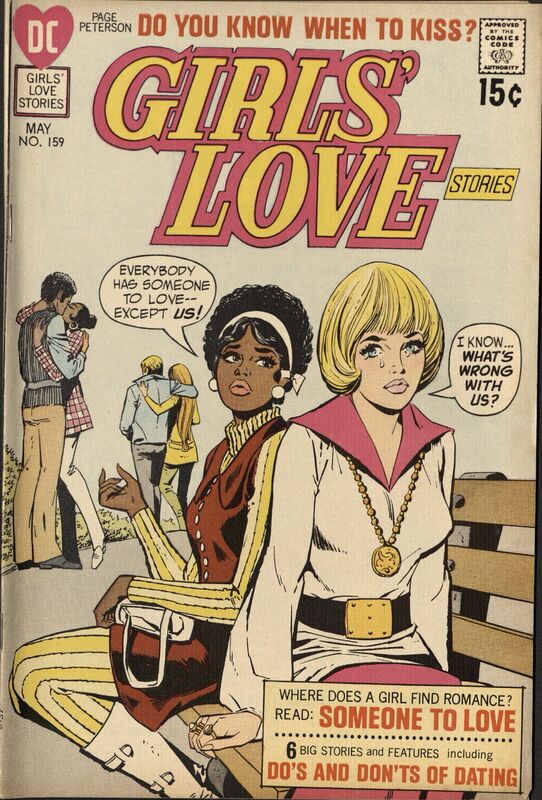 Seeing females engage in a healthy platonic relationship with each other is a rarity in early romance comic books. This issue of Girls’ Love Stories is the only issue to show this and also one of the few  issues in our collection to feature on the cover  a woman of color as a prominent character. Both women on the cover are longing for love, but unlike the other issues they don’t observe each other as competition. The couples are jealous of two different same sex couples of their own race leading the reader to believe they are pursuing a monoracial relationship. This implies that the only way women can engage in genuine friendships is when there is no fear of competition.