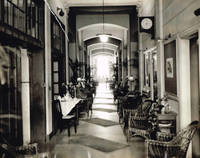 The Peabody Archives also contains more than 200 special collections in the performing arts, many of which involve individuals and organizations with a connection to the Peabody Institute or the Baltimore area. Historical collections involving African-American musicians with ties to Baltimore include the following:

For more information on these materials, please contact peabodyarchives@lists.jhu.edu.

The Peabody Black Student Union and the Peabody Society of Black Alumni are active organizations for current and former Peabody students who wish to get involved in creating a more positive experience for today's African-American students at Peabody.