After the Board eliminated official policies barring African-American students from Peabody, black students started enrolling at the Preparatory and the Conservatory for the first time since Paul Brent’s acceptance. They were entering a culture, however, that had excluded them for nearly 100 years and while they may have been accepted, they faced many challenges at Peabody.

Audrey Cyrus McCallum, who was the first African-American student to enroll at the Preparatory, began her studies at Peabody in the Fall of 1955. On December 3, 1955, she performed Brahms’ Intermezzo in A on what was likely her first piano recital at Peabody. On the same recital program, another student performed a piece by Debussy with a title that includes the N-word, another sign of an environment that was still excluding black students in significant ways although they had been accepted. The recital program is pictured to the right.

McCallum was one of many throughout the 1950s and 1960s who made up the first generation of African-American students at Peabody. Several of these alumni shared stories from their time at Peabody through the Sounds and Stories project in 2002 and through personal interviews in 2018. Because these stories are largely unaccompanied by documents or photos, you can read more about them beginning on page 36 of the paper found at the beginning of this exhibit. 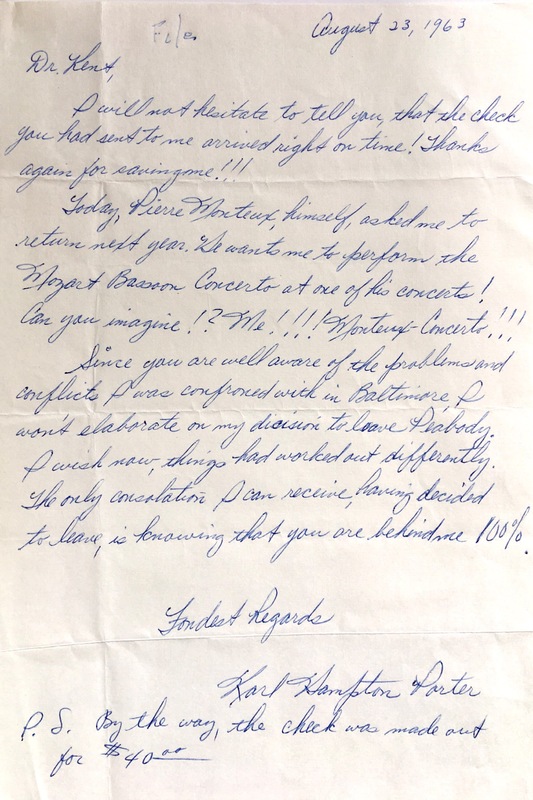 In addition to the difficulties of navigating the culture at Peabody, living in Mount Vernon presented its own set of challenges for African-American students. Segregation was common in public accomodations in Baltimore until 1962, and even after that time black students were met with prejudice, difficulty in housing situations, and a feeling of "otherness" in a primarily white and elitist neighborhood.

Wilda Heiss, a white student and Baltimore native, shared a story of encountering segregation at restaurants in 1961. After a concert, guest artist Joseph Eger wanted to take several students out for dinner. After being denied service at two different restaurants because Karl Porter, the bassonist in the student ensemble, was black, Eger and several other students decided to remain in the restaurant and be arrested.

A couple years later, in 1963, Porter decided to leave Peabody for a better opportunity. Records and correspondance between faculty and administration suggest that he had had a difficult time at Peabody, and in his letter to Director Charles Kent he states, "Since you are well aware of the problems and conflicts I was confronted with in Baltimore, I won’t elaborate on my decision to leave Peabody." His letter is pictured to the left.

Porter's situation is just one example of the many instances in which black students have been pushed away from Peabody because of discrimination and an oppressive environment.