In the mid-1960s, Peabody received multiple letters from government officials addressing racial discrimination. The first of these was from the Maryland Commission on Interracial Problems and Relations. It congratulated Charles Kent on a "cordial meeting" the day before, in which he agreed to eliminate racial indicators from all Peabody applications.

Later that year, Peabody received a letter from President Kennedy requesting an update on efforts being made to reduce racial discrimination and high dropout trends. While the original letter could not be found, the following correspondence provides a clear picture of the letter's contents. It was sent to many schools, and more information is found in the Board of Trustees Minutes of New England Conservatory, which state, "The Chairman read a letter he had received from President Kennedy mentioning his concern about the effect of the civil rights problem upon student enrollments in the fall, requesting public and private educational institutions to take all possible steps to adopt non-discriminatory admission policies and suggesting that progress reports be submitted to the United States Commissioner of Education." William Marbury was the recipient of this correspondence, and was not very receptive of the request. All of these documents can be read by clicking on the images below. 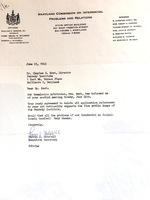 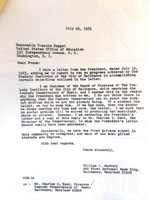